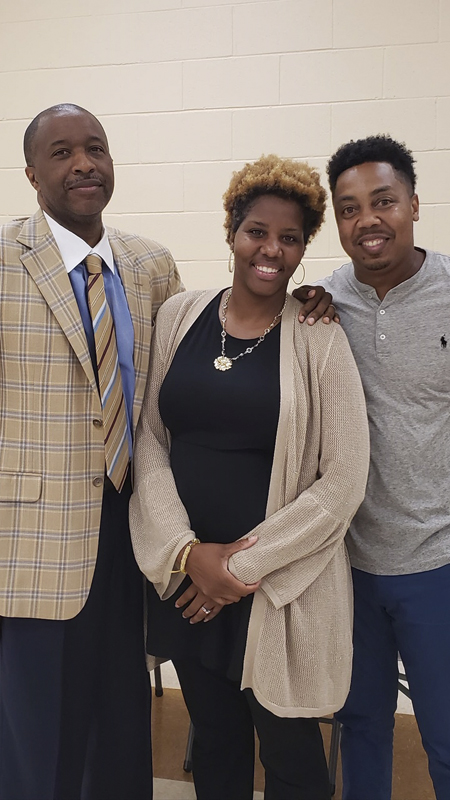 The Prentiss Headlight—Carrie Hammond Walker (center) has been named the principal for Jefferson Davis County High School. She is pictured with JDC school board attorney Nate Armistad and her husband, Chris.

Carrie Hammond Walker was named principal of Jefferson Davis County
High School at the regularly scheduled June school board meeting held
at the Academic Success Center in Carson.
She will replace Will Wheat who is now the principal at Forrest County AHS.
Walker has been assistant principal of JDCHS for the last two years.
She was the principal at J.E. Johnson for two years prior and helped
the school make an  impressable improvement from an F grade to a B
under her leadership.
Walker has also served as a principal in the Durant school system and
as the assistant principal and Algebra I teacher at Prentiss High
School.
Walker’s motto has always been “Excellence without excuses.”
“I give all honor to God for granting me the opportunity to be the
leader of Jefferson Davis County High School,” said Walker.
“I do not take this assignment lightly. There is truly no better way I
would want to step into my 18th year as an educator.”
“I have always believed in the academic abilities of the students of
Jefferson Davis County. I plan  to work diligently with the community,
parents, and staff in an effort to move the JDCHS students to their
highest potential.”
“Thanks to the selection commitee, Superintendent Russell, and the
JDCSD School Board for your approval.”
“I am always grateful to have my supportive husband, Chris, daughters
Janiya and Khalia and the best parents, James and Emma cheering me
on.”
“I solicit your prayers as we soar to greatness. Jaguar Nation, let’s
make it happen!”
A special called school board meeting will be held June18 to discuss
several items tabled from the regularly scheduled meeting.
Approval of resolution to retain legal counsel and municipal advisor
to assist with a proposed note issue and other matters, approval of
engagement letter for bond or loan counsel offered by Young Law Group
and approval of engagement letter for municipal advisor offered by
MuniGroup, LLC.,  were items that the board felt needed more
discussion and clarity.
Also on the agenda was the approval of phase 1 facilities enhancements
and upgrades with M3A architecture, PLLC.
It was removed from the agenda and tabled until the regularly
scheduled October board meeting.