Big Al comes home to give back at 11th annual camp 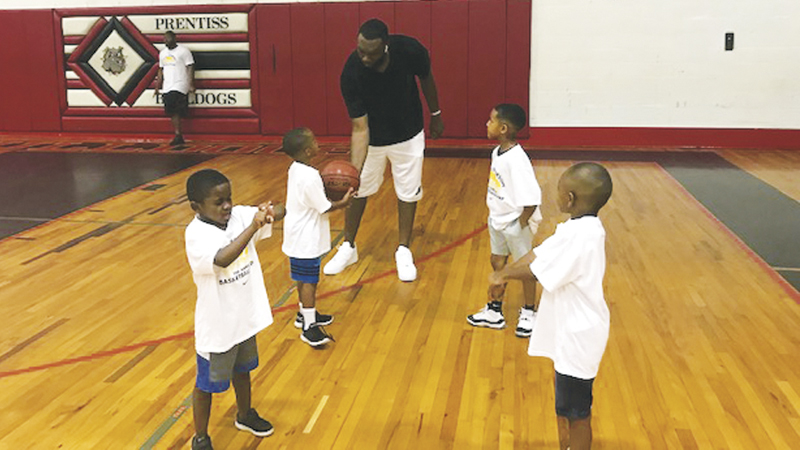 Prentiss native Al Jefferson had over 300 kids take part in his 11th
annual youth basketball camp held at the former Prentiss High School.
This year’s camp was split into four sessions with kids in grades 1-12
participating in the three-day camp. Kids from all over the area and
as far as Jackson attended the camp.
Since Big Al started the camp in 2009, roughly 3,500 kids have come
through his camps free of charge. Over 140 boys and girls participated
in the Monday sessions alone.
This camp is strategically placed in the year so each participant will
receive school supplies right before the start of school.
Along with the supplies, participants also received a basketball,
T-shirt, lunch and snacks throughout the session.
The camp is run by the National Basketball Academy out of Ohio.
“This is the longest running free camp in the tate of Mississippi,”
said camp director Mitchell Williams.
“Who in the world would give a free basketball camp and you get free
school supplies and lunch, too. Not to mention instruction from a
former NBA star. It’s crazy.”
Jefferson’s main goal for starting the camp was to give back to the
kids and make sure they knew their dreams could come true.
“It means a lot to me seeing these kids each year.
“Coming from this same town, we didn’t have smart phones, ipads or computers.
“We loved to get outside and play basketball. And that’s what I’m
trying to bring back.
“I know it’s a new generation, but there are kids out there that still
have goals to get to the NBA or NFL and I just want them to know they
can reach those goals.”
“That was the main focus when I started this camp. To let these kids
know they can reach their goal no matter where they are from.”
“I don’t know if people realize the feeling you get when you have a
dream and actually live that dream and watch it come into reality as
you grow up. It is an amazing feeling.”
“I am a big believer in having fun. Basketball is all about fun.
“For the young kids at this camp it is about having fun and getting
out of the house.
“For the older kids, they learn more about fundamentals. A lot of
people don’t realize how important the little things in the game are.”
“This is home. This is my therapy. Coming back home where it began. I
have seen alot of kids grow up through the years at this camp.”
“It’s been great. It’s hard to believe we have been doing it this long.”
“In the last six or seven years girls and boys basketball in Jefferson
Davis County  has improved in a big way.” “Thats what keeps me doing
this.”
Jefferson is now retired from the NBA but plays in the BIG3 league.
The BIG3 is a professional 3-on-3 league consisting of 12 teams whose
rosters include both former NBA players and international players.
“The competition is still there, but the schedule isn’t as aggressive,
and I am enjoying that.”
“I didn’t think it was going to be as much fun as it is. Even at my
age, you still have that itch. The BIG3 is perfect for guys like us.”