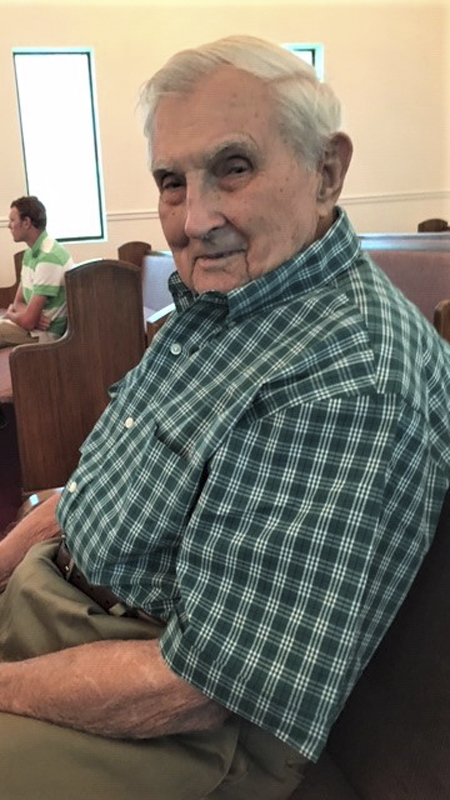 Robert Glynn Allen of Carson celebrated his 99th birthday with a big party at Carson Baptist Church. Many friends and family attended the event.

He even received a congratulatory letter on his longevity from Gov. Phil Bryant.

His parents were Harris Seymour Allen and Myrtle (Nelson) Allen who were farmers. He had one sister, Lillian. Being the only boy, Allen stated his father believed in him working.

The family raised cotton and corn using a mule-pulled plow but in 1943 they bought their first tractor.

The railroad ran through their place in Silver Creek and Allen stated his mom, sister and he used to ride the train to Carson where his Aunt Frannie Polk lived.

Allen is one of the few remaining WWII veterans of Jeff Davis County.

He joined the Navy in 1942 and eventually was stationed on a transport ship carrying troops and supplies mainly to the Philippines.

He was at the siege of Okinawa in 1945. He stated one of the biggest threats to his ship was the Japanese suicide bombers, but the gunners managed to shoot those down and their ship was never hit by one like some were.

Allen said many sailors didn’t return home and he prayed every day he would survive to go back to his home.

“You never knew exactly when your time was up in the service until they came and told you that you could go home,” said Allen. “I sure was glad when that time came. I rode the bus from California to Silver Creek and Bill Milton Daughdrill took me home from the bus station.”

After his return to civilian life Allen farmed, ran a grocery business (said he didn’t really like that) and operated heavy equipment.

He married Shirley Lofton who was raised down the road from where he lives now. They had four children, three girls and one boy: David Allen now of Milton, Florida, Rebecca Sutter of Carson, Jill Dedeaux of Pascagoula, and Julie Craven of Lucedale.

They bought their first television several years after he and Shirley married. Up until then they listened to the radio programs at night.

Growing up Allen attended Old Silver Creek Baptist Church where he was baptized. He remembers going to revivals that lasted five days.

They didn’t have cars so they would stay all day and have big dinners on the ground under the trees every day and all day services.

Although he has attended Carson Baptist Church for many years his membership has stayed at Old Silver Creek and in 2014 he was honored there as the oldest member.

He studied his lessons for Silver Creek School by a coal oil lamp.

He thought about the biggest change he has seen in his 99 years and decided it was the coming of electricity to the country.

When asked to what he attributes his longevity Allen said, “Probably eating right with no drink’n, run’n around at night or cut’n up like some did.” He still likes to ride his tractor around the place some but mostly stays in out of the heat.

His biggest health problem is macular degeneration which has taken a good portion of his sight but he still enjoys life.