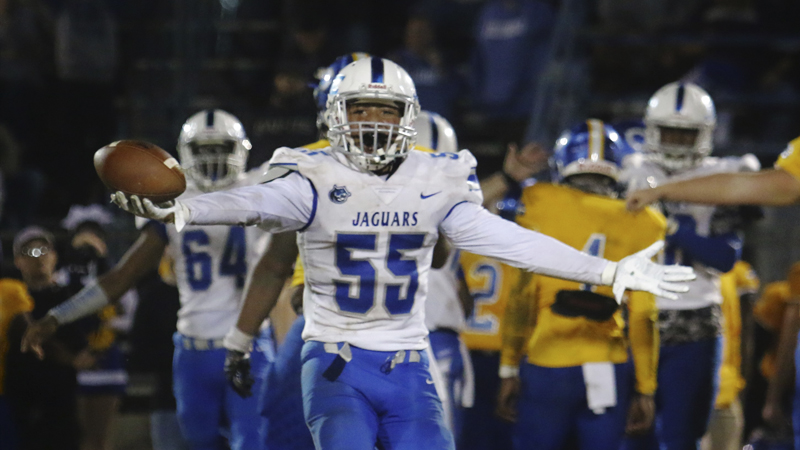 Jenny Hall / The Prentiss Headlight—Keathen Pittman #55 after he recovered a Columbia fumble in the Jags win against the undefeated Columbia Wildcats to advance the Jags to the State championship.

Jeff Davis (9-5) jumped on Columbia (13-1) early in the first quarter with Deandre Shorts racing 48 yards untouched for a touchdown to put the Jaguars up 6-0 on their first drive. It wasn’t until late in the first half that Columbia’s passing attack jumpstarted the offense.

Two plays after Javen Moses connected with Josh Brown for a 16-yard gain, Moses hit Jamison Kelly on a slant and Kelly broke a tackle and turned on the jets for a 40-yard touchdown. Antoine Franklin drilled the extra point to give the Wildcats a 7-6 lead going into halftime.

Late in the third quarter Malcom Hartzog got loose for the Jaguars and ran in a 26-yard touchdown. Jeff Davis converted the two-point try to recapture the lead 14-7. Omarie Johnson found a seam and returned the ensuing kickoff back to the Jeff Davis 37 that set up the game-altering sequence.

After completing a 26-yard pass to Dashod Ball, Moses connected with Kelly on a fade that would have set up the Wildcats with 1st-and-goal. However, Kelly was flagged for offensive pass interference on a questionable call, leading to a punt. The Jaguars surged through the line, blocked the punt and returned it to the Columbia 32.

A few plays later Kyser Booth scooted into the end zone for the Jaguars to make it 20-7 with 9:22 remaining in the fourth quarter. On the ensuing possession Moses was stripped trying to scramble on third down, setting up a 26-yard Michael Carraway touchdown for the Jaguars to put the game out of reach.