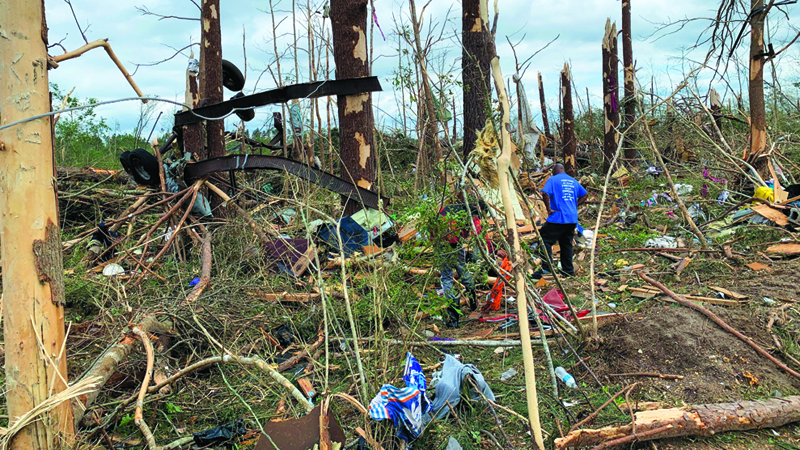 Holley Cochran / The Prentiss Headlight—A Bassfield resident stands in disbelief as he searches through the rubble on Graves Keys Road. Two tornadoes ripped through Jefferson Davis County on Easter Sunday leaving death and destruction throughout the county.

Two tornadoes ripped through  Jefferson Davis County Easter Sunday afternoon leaving 100 homes damaged or destroyed and 80 people displaced in the county. Four people lost their lives  resulting in more death and destruction than any other county affected by the storms.

The National Weather Service said the tornado that started in Walthall County and then moved to Jefferson Davis County, Covington and Jones Counties has been given a preliminary rating of EF-4 with 170 mph winds.

WAPT Chief Meteorologist David Hartman said it was possibly the strongest he had seen on radar in his career.

The preliminary reports from the National Weather Service rated a second tornado that started in Lawrence County near Jayess and ended near Taylorsville in Smith County an EF-3 tornado with 136-165 mph winds.

“This storm was as bad or worse than anything we’ve seen in a decade,” Mississippi Gov. Tate Reeves said on social media Monday. “We are used to tornadoes in Mississippi, but no one is used to this. Winds topped 200 MPH. The trail was long and devastating.”

Reeves has declared a state of emergency in response to the tornadoes. MEMA asks storm victims to report damage online at msema.org/contact/crisistrackcsr/.

Four people were killed when the first tornado struck Mama D’s on Graves Keys Road. Killed were mother and daughter Joann Easterling and Nina Adams, and Robert Thompson.  All three died on the scene.

“Through this time of devastation in our community with lost lives and homes, we are forever grateful to those that have helped in any way from clean-up to donations,” said Bassfield Alderwoman Angie Speights Ladner.

“We are Bassfield strong and we will survive.”

“Destruction — everything’s gone,” said T.J. Davis, who lost everything in the tornado. “I was in my home, saw it coming, got in my truck, and left. I barely outran it.”

Davis not only lost his home and the home his great-grandparents built, but he also lost a good bit of his livestock. His chicken houses were essentially flattened.

According to the National Weather Service in Jackson, it may take several days to understand just how powerful this storm was.

“We’re still in the preliminary phases of doing damage assessment,” said Chad Entremont with the NWS in Jackson. “We have three different teams out trying to cover different sections of two long and very damaging tornado paths. So, it’s going to take quite a bit of time to start assessing everything.”

“We have lost some fantastic Mississippians and we also lost an awful lot of property.”

“What I want everyone here to know is that even though we got knocked down and took a tremendous punch in the mouth, we are going to get back up and come back bigger, better and stronger.”

Any family needing assistance due to the tornado on Easter Sunday can come to Bassfield City Hall (staging area) for assistance.

Donated goods (no clothing) should be taken to the Jefferson Davis County High School gymnasium in Bassfield. The donation center will be open daily from 9 a.m. until 5 p.m. for goods to be donated and for needy families to pick up.

Daily feeding for affected families is being provided by the Salvation Army and that location is also at the Jefferson Davis County High School by the football concession stand.

More information will be forthcoming in regards to public and individual assistance for families. “We all need to pray for each other. There is total devastation in JDC right now, but we will make it through.”

JDCH administrator meets with the JDC Board of Supervisors…