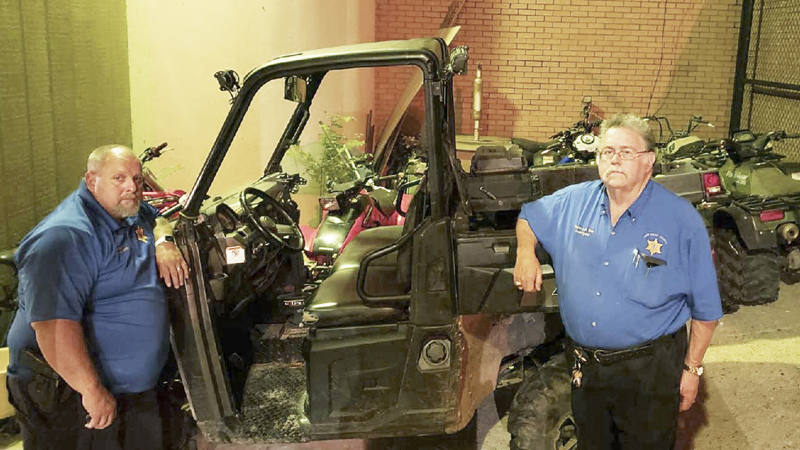 The Prentiss Headlight—T. C. Cooley and John Wayne Tolar with a recovered side-by-side that was stolen from Payne Cole Road just outside of Prentiss. A red Honda ATV was also stolen in the same area from Adams Lane. If you have any information regarding these incidents, please call the sheriff’s department at 601-792-5169.

Jefferson Davis County Sheriff’s Deputies recovered a stolen ATV after it was located in Perry County.

The side-by-side was stolen from a shop on Payne Cole Road in Prentiss.

Thanks to a tracking device placed on the ATV by the owner, Wallie Bruce,  detectives were able to trace it to Sierra Road in Perry County.

Perry County Deputies located the ATV behind a house, retrieved it and it is now back in Jefferson Davis County.

Jefferson Davis County Sheriff’s Officers also recovered tools owned by Bruce in the Mikell Cemetery not far from the house where items were stolen.

There were several guns and other items stolen from a safe that have yet to be recovered.

No arrests have been made, and the investigation is ongoing.

“There are tracking devices out there that hook to batteries and if it is cut, the ATV won’t crank. It is definitely worth the investment.”