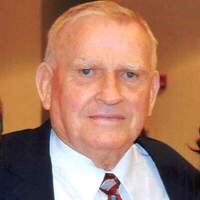 Rev. Tim Beard officiated the services with interment following in the Collins City Cemetery in Collins.  Billy M. King-Colonial Chapel Funeral Home in Collins was in charge of the arrangements.

A native of Itta Bena, Coach Bailey dedicated his life to teaching and coaching, making a positive influence on young people of South Mississippi.

In addition, he was selected to act as both Assistant and Head Coach of two of Mississippi’s All-Star Football teams. Coach Bailey served as both principal and head football coach during his tenure at Collins High School.

He amassed a record of 291 wins over forty-one varsity coaching years, and a grand total of 51 years of coaching, including 16 conference championships while at Collins High School from 1958 – 1986.

He was the headmaster and football coach at Prentiss Christian School and led the Saints as they won the school’s two football state championships in 1987 and 1993.

Before Coach Bailey began his coaching career, he was inducted into the United States Army, and had the honor of guarding the Tomb of the Unknown Soldier.

He was a faithful member of the Collins United Methodist Church and the Followers Sunday School Class.  Coach Bailey served on the Administrative Council and other agencies of the church.

He was preceded in death by his wife, Bobbie Hinton Bailey; his parents, Thad and Jenny Bailey; and a grandson, Lee Bailey Wigglesworth.

Survivors include one daughter, Becky Wigglesworth Grizzard, and her husband, Kent of Pearl; one son, Jack Hinton Bailey of Oakland, Tennessee; two grandchildren, Amy Wigglesworth and Sam Wigglesworth, both of Jackson; and a host of other family members and friends.

The family requests that memorials be made to Lee Bailey Wigglesworth Memorial Trust Scholarship at Bancorp South or the United Methodist Children’s Home.

Family and friends may sign an online guestbook at www.billymkingcolonialchapel.com.