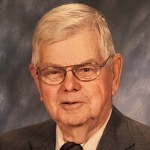 Funeral Services for Mike Bridges were held at 11 a.m. on Saturday, Nov. 14, 2020, in the Saulters Funeral Home Chapel.

Saulters Funeral Home was in charge of arrangements.

Mr. Bridges was a World War II Veteran of the U.S. Army.

He was a farmer and a member of Whitesand Baptist Church.