Veteran and Prentiss graduate gives back in the classroom 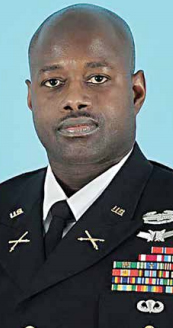 For Steve Johnson, leadership is about helping others to grow. That has been his guiding principle in a 24-year military career, and now in the education field.

The retired Army officer is in his sixth year of teaching, navigating the challenges of distance learning.

He received a Green to Gold scholarship, and was released from active duty to attend Jackson State University in Jackson, where he earned a computer science degree, and a commission as a second lieutenant.

After college, he returned to the Army where he served as a field artillery officer for the next 12 years.

He spent the last five years of his military career as Space Operations Officer for the Space Missile Defense Command/ Army Strategic Command, retiring as a major.

Johnson decided to enter the education field after retirement to continue to give back to his community.

“I enjoy teaching and seeing the students when they come in at the beginning of the year, and helping them get back into the rhythm of learning,” said Johnson.

“By the end of the year, you are able notice how the student has grown academically.”

This year, due to COVID-19, academic instruction has been through virtual learning and in person instruction. Although teachers are available to answer questions online or by phone, Johnson feels the personal touch “is definitely missed.” “I believe distance learning will be the wave of the future, but I also understand that people need a physical building for students who may need additional support.”

“Some of that support is very challenging to provide over the internet.”

Johnson also serves as a deputy voter registrar for Bell and Travis Counties, He volunteers at the Killeen Food Care Center and is also a member of the NAACP and his local church.

He has a 22-year-old son who lives with him in Killeen, Texas.

Johnson sums up his philosophy with a quote from educator and author Charles H. Wesley: “Leadership is a growth—a growth for the leader and a growth for the followers. The true lead- er grows himself and assists others to grow to be leaders themselves.”