‘It was an honor to call him my friend’ 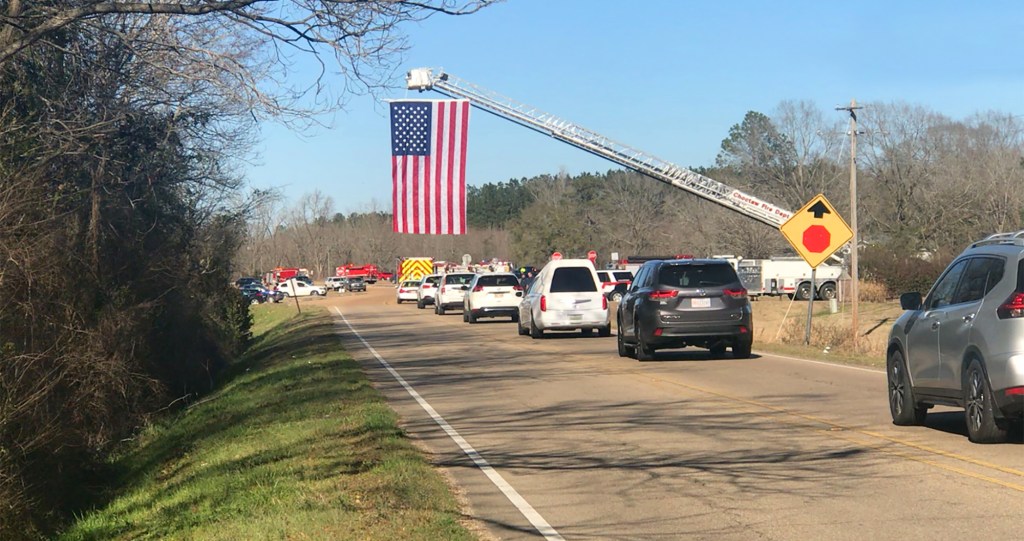 Pruitt lost his battle with cancer on Feb. 17 after being diagnosed with Cholangiocarcinoma in September 2020.

The Tri-Community Fire Department out of Marion County and Lawrence County Fire Services out of Lawrence County sent their trucks and manpower to provide fire coverage for the county while Jefferson Davis County firefighters paid their last respect to Pruitt.

Nolan Leblanc of Bonaventure provided the  ladder truck to display the American Flag, and Donnie Weeks and Trey Faust of Bonaventure for brought the truck.

The flags at the Ronald W. Jones Memorial Public Safety Complex were brought to half staff on Feb. 17 in honor and memory of Pruitt, for his dedicated service to the Town of Prentiss and Jefferson Davis County over the years as a fireman and first responder.

“Please join us in keeping his family and friends in your prayers,” said Prentiss Mayor Charley Dumas. “Godspeed, buddy.”

He was also a volunteer firefighter for the Granby Volunteer Fire Department, winning Granby Firefighter of the Year twice.

“I first met Chuck back in 1995 when I was hired at the fire department, said Prentiss Fire Chief Wayne Bass.

“He was my Captain, and I was a brand new trainee. From day one, Chuck had my utmost respect. He was kind and patient,  and answered any questions that I had as a new fulltime firefighter.”

After Bass was promoted to fire chief in 2017, the first person he thought of to fill his slot was Pruitt.

Pruitt had taken time away from the fire department to work in the pipeline industry.

“From day one back on the job, it was obvious that Chuck was a perfect fit. It was as if he had never left.”

“Chuck got along with everyone, and all his co-workers and volunteer firefighters loved him, and had a deep respect for him.”

“To know him was to love him. He would do anything he could to be of help to someone. He was always there when we needed him.”

“Chuck may be gone from his worldly home, but he will always be in our hearts and memories, It was my honor to call him my friend.”