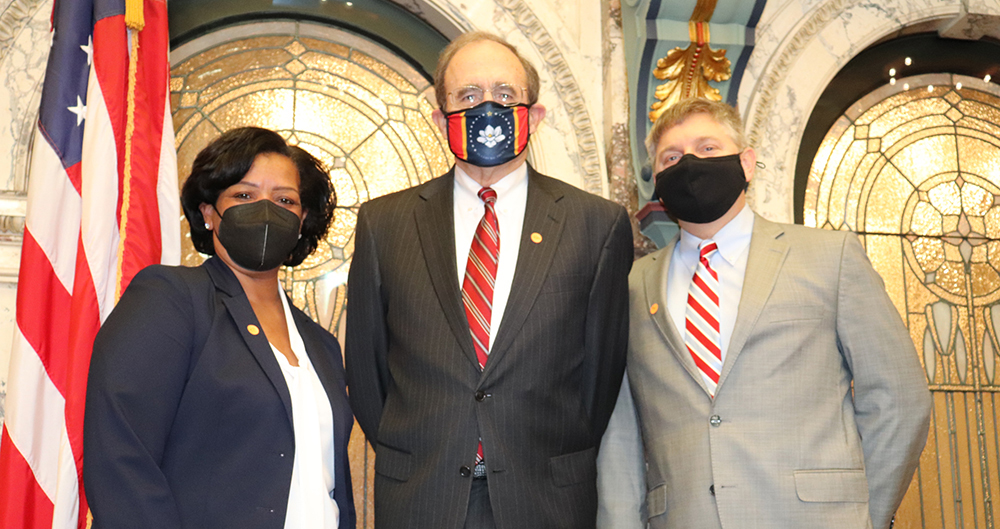 The Prentiss Headlight—Senator Joey Fillingane (right) delivered an opening prayer to the state Senate on Feb. 24. Fillingane is opposed to shifting the tax burden when asked about House Bill 1439. Also pictured is Senator Angela Turner Ford (left) who led the Pledge of Allegiance before Lt. Governor Delbert Hosemann (center) guided lawmakers through the day’s agenda.

A bill that would overhaul several state taxes, including elimination of the state income tax, was passed Feb. 23 by the House of Representatives.

The bill would phase out personal income tax over 10 years, cut grocery tax in half over five and increase other taxes, such as vehicle sales taxes.

House Bill 1439 passed 85-34, only one day after it was introduced and passed the House Ways and Means Committee.

“The tax overhaul proposal is probably the most historic policy change that’s ever been done, at least in my political career,” said Republican House Speaker Philip Gunn who authored the bill.

The bill will go to the Republican-controlled Senate for more work in the next few weeks.

Lt. Gov. Delbert Hosemann did not rule out passing a version of the massive tax restructuring bill,  even though he cited what he said were multiple problems with the legislation.

Still, Hosemann left the impression that if the bill makes it out of the Senate before the March 16 deadline, it will be dramatically different than the proposal that passed the House.

“I have not had one senator come to me and tell me he wants to pass this bill,” said Hosemann.

“No one would love to do away with the state income tax as much as I would,” said Sen. Joey Fillingane, R-Sumrall.

“However, the current proposal for the House of Representatives is merely a tax shift.”

“The current proposal, (HB1439), would raise the sales taxes on a host of items like farming equipment, energy and many other items.”

“I’m opposed to simply shifting the tax burden from one group of Mississippians. We should not penalize the poorest Mississippians among us which is what this bill would do.”

Gov. Tate Reeves has proposed phasing out the state income tax, which provides about one-third of the state general fund revenue, without raising other taxes to make up for the loss revenue.

Reeves said the tax cut will spur economic growth, leading to new revenue for the state.

Increasing or decreasing tax rates requires a three-fifths majority of both chambers of the Legislature.House Bill 1439 needed 72 votes because 119 members took part. It would need at least 32 votes if all 52 senators are participating.