JDC prisoner back in custody after escape 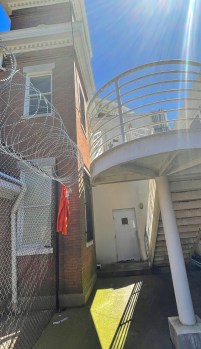 Holley Cochran / The Prentiss Headlight—Jerry Wayne Raynes’ pants and socks were caught on the newly installed razor wire during his escape early Sunday morning. Raynes was on the run over 24 hours before he was apprehended in Seminary. 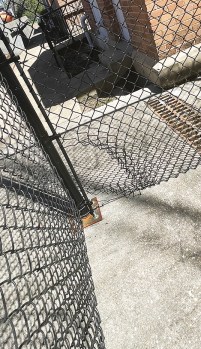 Holley Cochran / The Prentiss Headlight—After jumping off the stair railing at the courthouse, Raynes pried the chain-link fence apart before escaping through the alley.

A Jefferson Davis County prisoner is back in custody after escaping from the jail over the weekend.

Officials say Jerry Wayne Raynes escaped just before 3 a.m. Sunday morning. He was not discovered missing until 24 hours later, when the 911 dispatcher on duty received a call from a female friend of Raynes early Monday morning inquiring about him being out of jail.

The caller informed officers she had seen him in Hattiesburg the night before.

After his cell and realizing he had escaped, officers began a manhunt.

Raynes was captured by Mississippi Department of Corrections officers Monday morning in Seminary at a gas station.

According to Jefferson Davis County Sheriff Ron Strickland, Raynes’ cellmates took his meals from the jailer and pretended to pass them to him in an effort to cover for the escaped prisoner.

The report states Raynes climbed into the ceiling of the jail cell and through a vent in the roof during his escape.

He tried to come down the side of the building but was caught on the razor wire.

He then went to the stair railing and jumped to the ground before making an opening in the chain link fence and escaping.

Raynes reached the ceiling of the cell with the assistance of his cellmates, and it is believed he had some sort of tool in his possession to pry open the fence, authorities said.

“There is one roll of razor wire that has not been attached to the roof,” said Strickland. “We are waiting on the installer to complete the job. If that had been in place, he couldn’t have even reached the stairs.”

Raynes is a habitual offender and had already escaped once from the Jefferson Davis County Jail in 2016. He is currently in jail on charges of burglary, possession of a firearm by a felon and conspiracy.