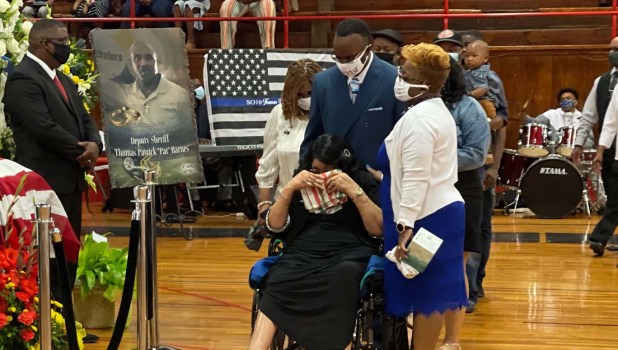 Holley Cochran / The Prentiss Headlight—Pat Barnes' mother, Betty Barnes, gives a final goodbye to her son before his service. 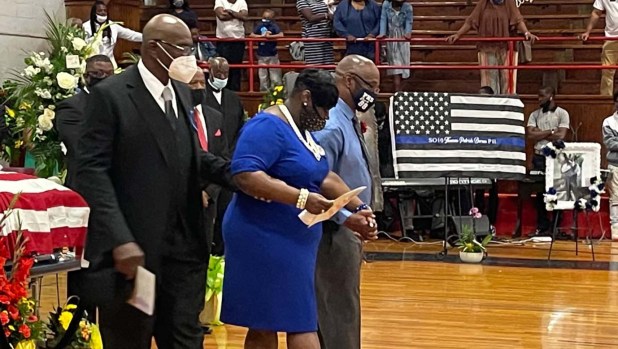 Holley Cochran / The Prentiss Headlight—The widow of Deputy Pat Barnes is seated before his funeral service. 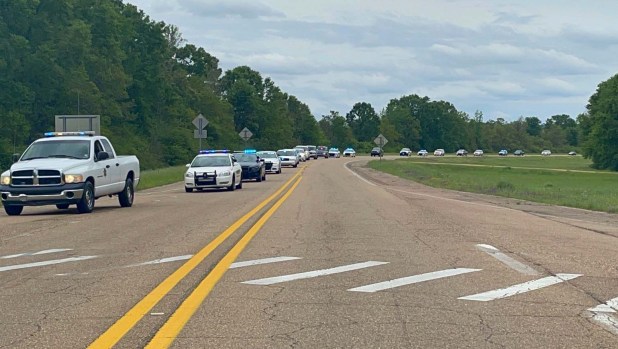 Holley Cochran / The Prentiss Headlight—Law enforcement officers from around the State escorted Deputy Pat Barnes to his final resting place in the Prentiss First Baptist Cemetery. 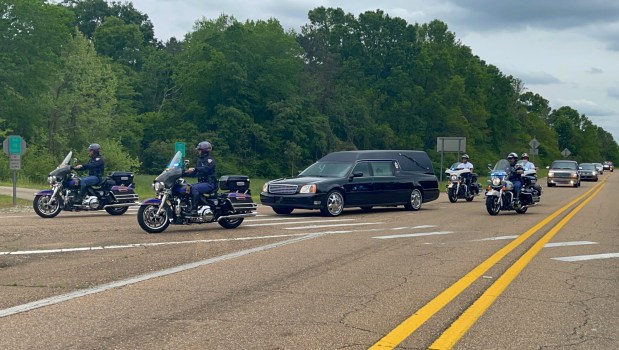 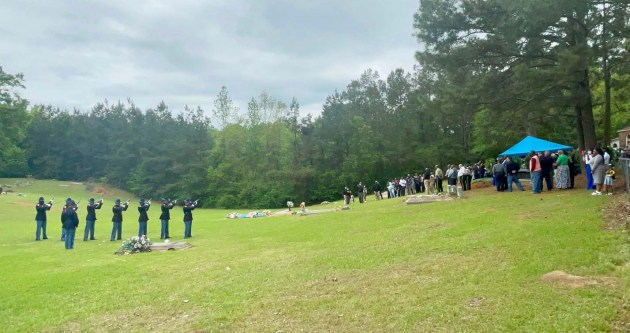 Holley Cochran / The Prentiss Headlight- A 21-gun solute and the playing of Taps concluded the graveside service for JDC Deputy Pat Barnes.

A celebration of life was held for Thomas Patrick “Pat” Barnes this morning. The service was held at 11 a.m. the J. E. Johnson Gymnasium in Prentiss.

Barnes was a deputy with the Jefferson Davis County Sheriff’s Department and was killed in an on-duty car accident on April 10 while responding to a Prentiss Police officer’s need for back-up.

“Blessed are those that mourn, for they shall be comforted,” said Rev. Ronnie Barnes of Prentiss First Baptist Church. “Lord we mourn, and we need comforting.”

“When I first met Pat, I knew he was a force to be reckoned with. He was always doing what he could for people. He loved helping people. Whatever we asked him to do, he did it with no complaints.”

“God is going to see all of us through. Cast all your cares on him when remembering Pat, and He will see you through.” Only by the Grace of God will

we make it through this.”

Prentiss Mayor Charley Dumas offered condolences to the family and to Ron Strickland and the Jefferson Davis County Sheriff’s Department.

“Pat was a fine Officer. He was a quiet presence. He might not say a word, but you knew he was in the room.”

Barnes was also a part-time officer with the Prentiss Police Department.

A proclamation was read by JDC Sheriff Ron Strickland, followed by a resolution by the JDC Board of Supervisors President Bobby Rushing.

A family tribute was read by Charles Gholar, brother of Barnes.

The eulogy was given by Rev. Alfred Balthazar before the funeral procession to the Prentiss First Baptist Church Cemetery.

A 21-gun salute and the playing of Taps concluded the graveside service followed by Barnes’ final call.

“SO-10 is 10-7. We salute this hero and excellent public servant, honoring his calling until the very end. We thank you for your dedication and service to the citizens of Jefferson Davis County. Blessed are the peacemakers, for they shall be called the children of God. Last call for SO-10, Deputy Pat Barnes. Rest easy brother. We have it from here.”