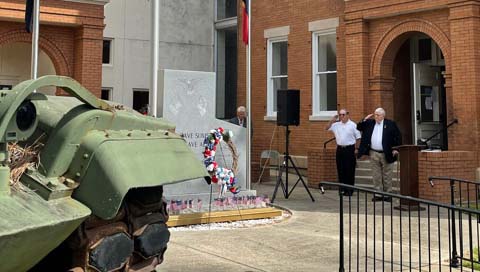 Holley Cochran / The Prentiss Headlight—Sgt. Joe Bridges and Maj. Walter Moeller salute during the playing of Taps at the conclusion of the Memorial Day Service held in Prentiss Monday morning. 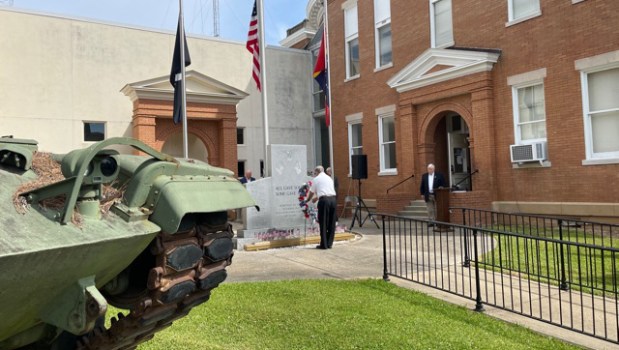 Holley Cochran / The Prentiss Headlight—Sgt. Joe Bridges places the wreath at the memorial of those Jefferson Davis County soldiers who gave their lives in war.

Holley Cochran / The Prentiss Headlight— Msg. Harry Carter speaks to the crowd at the Jefferson Davis County Courthouse during the Memorial Day Service.

It was a beautiful morning for the Memorial Day program held Monday at the Jefferson Davis County Courthouse.
The invocation was given by Sgt. Joe Bridges and welcome by Prentiss Mayor Charley Dumas, followed by the National Anthem.
The speaker for the event was Msg. Harry Carter, U.S. Air Force Ret.

“In 1990 I was deployed to Saudi Arabia,” said Carter. “We were the first airplane in, once President Bush decided that is what needed to be done. We had some difficult times in Desert Shield/Desert Storm.”

“The turning point for me was Feb. 25, 1991. As I stood on the airfield and I looked down across the city of Dhahran, I saw a streak coming across the sky. I didn’t realize what happened until the next morning. That night 28 soldiers lost their lives in an explosion. Some were friends, some were co-workers, but they were a brotherhood.”

“So Memorial Day means a special time for me. It reminds me of what they did. Every one of us who left and deployed for Desert Shield/Desert Storm, just like any other deployment and any other war, we went voluntarily. Realizing and understanding that we may be put in that position that we had to give our lives, we still did that willingly as everyone else has over the years. They give their lives so we can stand here and have the freedom that we have in this country.”

“On the front of our program it says, ‘All gave some, some gave all,’ well they did. The families that were left behind have done the same thing. They gave it all. They gave their loved ones, their fathers, their brothers, their sisters and their mothers. They gave it all and they have to deal with that over the years and this is our way of being able to show them the honor and respect of what they gave for us.”

“They gave it all just like Christ gave it all for us when he died on the cross. He shed his blood just as these men and women we are going to name here today. So, as we go about today, it’s not just about a three-day holiday, or the start of summer or the first bar-b-que cookout. It is about remembering those and what they gave for us.”

A time of remembrance was given to Prentiss Veterans Bob Everard, Wayne Hathorn and Mitchel Gamblin, who died in 2021.
Walt Moeller followed with the reading of the names of the soldiers from Jefferson Davis County killed in action as flags placed at the monument.
Those killed in action in WWI were: Pvt. Howard E. Rush, Pvt. Virgil E. McNease and Pfc Henry T. Bullock.

Sp4 Marvin L. Hall was killed in the line of duty during the Vietnam War.
At the conclusion of the ceremony, a wreath was placed at the monument
followed by the playing of Taps.

The program was sponsored by the Jefferson Davis County Veterans Administration and the Town of Prentiss.