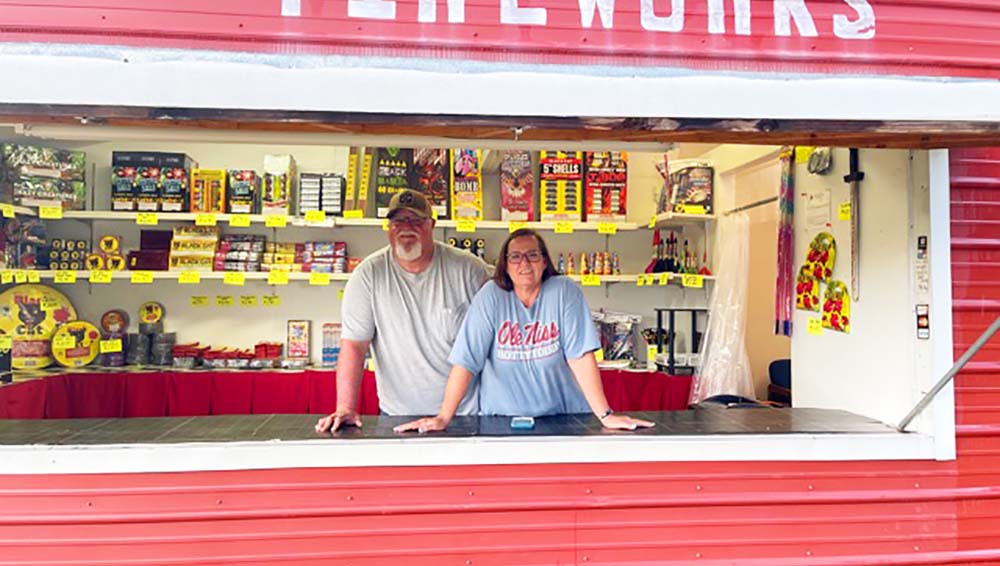 Holley Cochran / The Prentiss Headlight—Joann and Bubba Reynolds have been selling fireworks just outside of Prentiss for 20 years this Fourth of July.

Big Dog Fireworks in Prentiss is now open through Monday for the Fourth of July holiday. The fireworks stand will be open each weekday after 3 p.m. and will open at 10 a.m. on Saturday and 8 a.m. on the Fourth of July.

Owners Bubba and Joann Reynolds started selling fireworks 20 years ago on the Fourth of July when their daughters were just teenagers.

“Someone that Bubba works with was after us to start selling,” said Joann Reynolds. “He made us a deal that he would bring us the product and come buy back anything we didn’t sell, so we didn’t have anything to lose. We didn’t have single thing left for him to come get.”

“We have some of the best customers,” said Bubba Reynolds. “It has been fun to watch their kids grow up and see them year after year.”

New Year’s is best holiday, the Reynolds say, because Christmas and New Year’s are right there together, and it helps that most people don’t have to work New Year’s Day.

“The biggest thing in this business is the day the holiday falls on during the week and the weather,” said Bubba Reynolds. “This year we aren’t under a burn ban, we have had plenty of rain, so this should be a great year for us, especially with the Fourth falling on a weekend.”

Big Dog Fireworks is located on Radio Road at the Hwy 13 North intersection and has fireworks for every budget from .25 cents to $200.

The use of fireworks is prohibited inside the city limits of the Town of Prentiss. Officers will issue a warning first, then a citation if use continues.