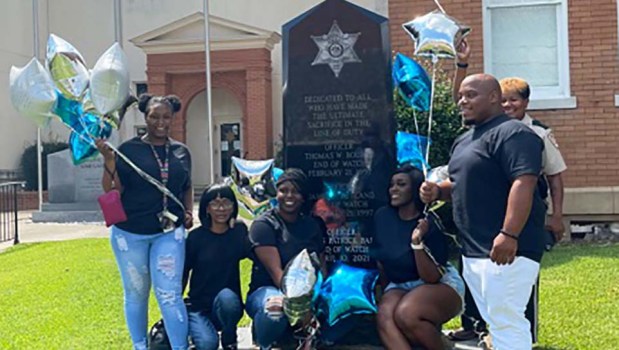 Holley Cochran / The Prentiss Headlight—Family members of Deputy Pat Barnes in front of the Officer Memorial Monument that has recently been engraved with his name after his death in April. 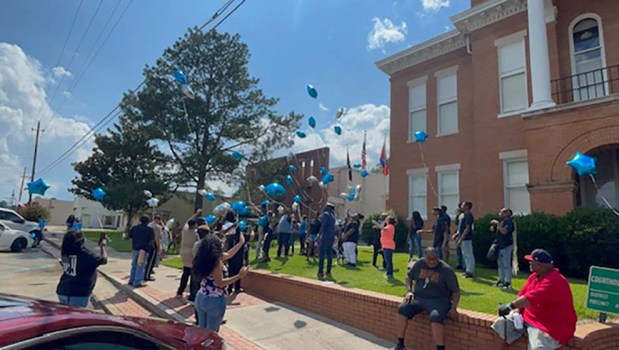 Holley Cochran / The Prentiss Headlight—More than 50 friends and family members gathers on the Jefferson Davis County Courthouse lawn for a balloon release on what would have been Pat Barnes’ 51st birthday.

A balloon release was held on the lawn of the Jefferson Davis County Courthouse Saturday afternoon in memory of Deputy Pat Barnes. Family and friends gathered to share stories about Pat on what would have been his 51st birthday.

“We need to love each other, that’s what he would do,” said Pat’s son Demetris Barnes.

“He didn’t do birthday parties, so he would be so happy to see everyone here today,” Pat’s daughter Kendriona said tearfully.

“Pat was our go-getter,” said his sister Jerlene Magee. “Mama called him our little boss man.”

“He kept us all together, he never gave up the fight,” said Pat’s brother Greg Barnes. “I miss him every day.”

“He was the cool uncle you couldn’t stay mad at,” said Young.

At the conclusion of the ceremony everyone released their balloon with birthday wishes for a loving father, brother, son and friend.