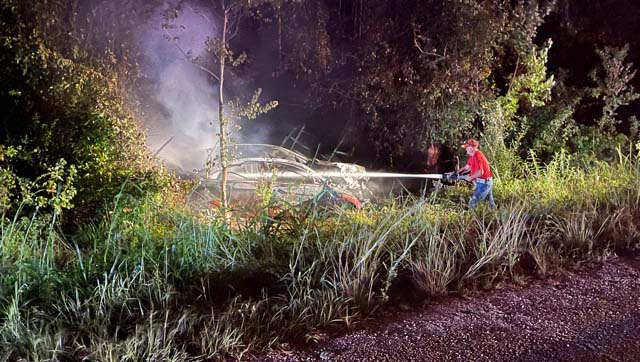 Holley Cochran / The Prentiss Headlight—Clem Volunteer Fireman George Griffith works to extinguish a fire caused by a car accident at the end of Granby Road at 184 East late Monday night.

First responders were called to Granby Road and 184 East just outside of Prentiss Monday night after receiving reports of a car on fire. “My wife and I heard what sounded like an explosion,” said Rev. Michael O. Evans. Evans lives near the accident scene and immediately went outside and called 911. When responders arrived, they found a Hyundai Sonata on the woods on fire. Killed in the accident was Carl Longino, 60, of Magnolia Circle in Prentiss. Investigators believe he was traveling down Granby Road and crossed 184 before hitting a tree.