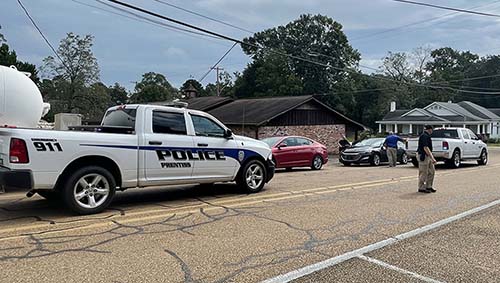 Holley Cochran / The Prentiss Headlight—Victor Schexnayder is placed into federal custody at the Jefferson Davis Courthouse after being charged federally with affecting interstate commerce.

Jefferson Davis County Sheriff’s deputies were called to a cell tower on Clem Road Sept. 8 after workers reported abnormal damage to the tower that caused an outage.

According to authorities, Schexnayder utilized a targeted explosive in order to damage a telecommunications device tower owned and operated by AT&T.

Multiple sources say Schexnayder was a former employee and was recently separated from AT&T.

“At this point, we do not suspect this is related in any way to an act of terrorism,” said ATF South Mississippi Resident Agent in Charge Jason Denham.

Schexnayder was charged with felony malicious mischief and booked into the Jefferson Davis County Jail.

After a search warrant was executed on his property, Schexnayder was taken into federal custody Sept. 17 and charged federally with 844-I. United States Code 844-I states that  whoever maliciously damages or destroys, or attempts to damage or destroy, by means of fire or an explosive, any building, vehicle, or other real or personal property used in interstate or foreign commerce or in any activity affecting interstate or foreign commerce shall be imprisoned for not less than 5 years and not more than 20 years and fined under this title, or both.

Schexnayder was taken to the Stone County Correctional Facility in Wiggins which serves as a federal holding facility.

He appeared in district court before U. S. Magistrate Michael Parker last Wednesday and was denied bond.

The ATF is partnering jointly with the Mississippi Bureau of Investigation and the Jefferson Davis County Sheriff’s Department with this investigation. According to investigators, more charges could be forthcoming.