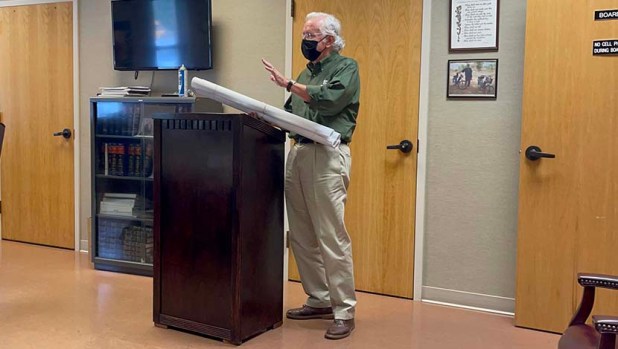 Holley Cochran / The Prentiss Headlight—David Marsh with Benchmark meets with the Jefferson Davis County Board of Supervisors to begin preliminary discussions regarding a new detention center in Prentiss. 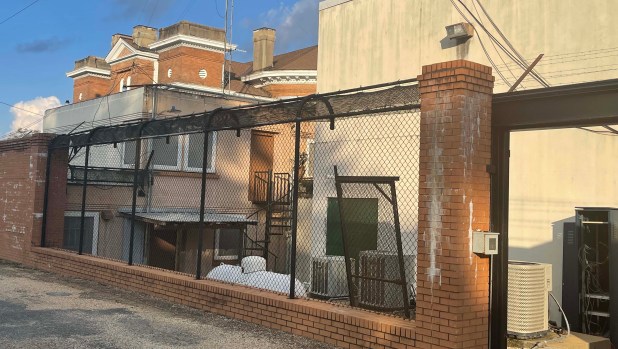 Holley Cochran / The Prentiss Headlight—The JDC Board of Supervisors are in the early stages of planning for a new detention center in Prentiss. The current jail, has not seen improvements in roughly 40 years.

The Jefferson Davis County Board of Supervisors is making plans for a new detention center in Prentiss and have reached out to Benchmark Construction Corporation of Jackson to guide them through the process. David Marsh of Benchmark made a presentation regarding the feasibility of the new detention center at the board meeting Monday.

The site for the new center will be in Prentiss across from the former Country Fisherman, just south of Hwy 13 and Hwy 84 interchange. Initial plans are for a 52-bed center with separate areas for females and males that will also include offices for the sheriff and staff. This property is already owned by the county and according to the supervisors, is a flat area that will only need minimal preparation.

“The current jail is in terrible shape,” said Jefferson Davis County Board President Bobby Rushing. “Our biggest concern is the safety and security of the community. Our jail is a hazard for the county employees and citizens of Prentiss.”

Also on the agenda was the discussion of the interlocal agreement between the Jefferson Davis County Sheriff’s Department and the Town of Bassfield. Bassfield Ladner expressed concerns over illegal drug activity and theft occurring in Bassfield and asked the board for assistance with a possible solution.  “Obviously we want to get our police department back, because its desperately needed,” said Ladner.  “Safety is a huge concern to our people.”  The Bassfield Police Department dissolved over a decade ago due to lack of funding.

The interlocal agreement between Bassfield and the JDC Sheriff’s Department states there is to be a deputy in Bassfield at all times.

“I appreciate your concern about Bassfield, but the whole county is my concern,” said Jefferson Davis County Sheriff Ron Strickland. “There is no way we can have someone in Bassfield 24-hours a day. My guys know straight up to stay in Bassfield as much as they can, but they have to answer other calls when they get them. They can’t neglect the other calls.”

“We are not here to complain, but to come up with a better solution to work toward,” said Ladner. The sheriff suggested seeking the funds needed to pay an off-duty sheriff’s deputy to cover Bassfield.

In other board news, Hugh Dyess of District 2 and Reggie Magee of District 4 were re-appointed as board members for the Jefferson Davis Community Hospital.

The board received a letter from JDC Superintendent Ike Haynes requesting assistance with removing limbs from county roads that were damaging buses and causing issues with the transportation of students. The board made a request for the list of roads where the issues are occurring.

In other business, the board of supervisors approved the following:

Approve Board President signing Application for Certification to expend one mill.

Approve spreading into the minutes the Certificate of Recapitulation of Real and Personal Rolls received by the State.

Approve acceptance of the 2020 personal property insolvency list and spreading into the minutes (list turned over to Southern Finance for collection).

Approve acceptance of the 2020 mobile home delinquent tax list and spreading into the minutes (list turned over to Southern Finance for collection).

Approve authorizing publication of travel for 2021 for the board in the Prentiss Headlight.

Approve continuation of petty cash fund for justice court for 2021.

Approve spreading into the minutes the chancery clerk’s certificate of tax loss.