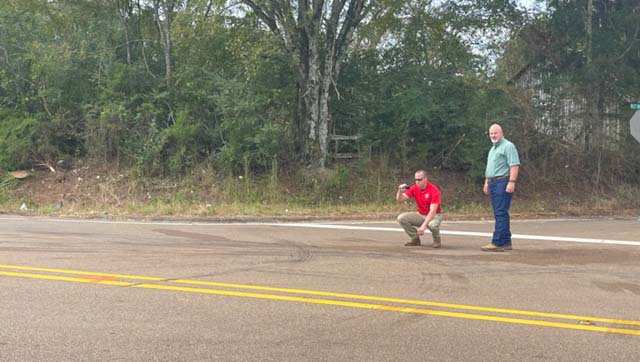 An accident re-constructionist with the Mississippi Highway Patrol, was at the scene today of the deadly accident that occurred Oct. 9 on Hwy 13 North in Prentiss.

Trooper William Carr was taking photos and measurements trying to piece together the events of that afternoon. Suzette Pittman and Laderrick Anderson of Prentiss were killed in the accident when their vehicle collided with a truck.

The investigation is incomplete at this time, but Trooper Carr did confirm that Pittman and Anderson were traveling south toward Prentiss when a truck entered their path while crossing from Whitesand Church Road to West Whitesand Road. Both vehicles ended up on the southbound shoulder just at the entrance of West Whitesand Road. Also assisting Carr was MBI Agent Frank Riley.

Pittman worked for the Columbia City School System in Marion County and was deeply loved by her co-workers and students according to Jefferson Middle School Principal Levi Robinson. “Suzette Pittman was not only excellent at her roles at Jefferson Middle School as Guidance Counselor and Head Coach for Girls’ Basketball, but in everything, she went above and beyond,” said Robinson. “She was an advocate for children, and it was her mission to make sure all students had what they needed. She would go out of her way to make home visits and reach out to organizations in order to help children in need of support. She was a champion for all and served as a mentor for a group of young girls who needed a guiding light in their lives. She will be dearly missed by her coworkers and the students she served so well.”