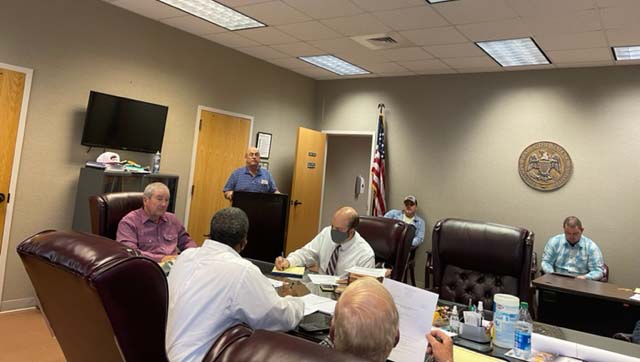 Holley Cochran / The Prentiss Headlight—James Townsend expresses concern to the Jefferson Davis County Board of Supervisors regarding the closure of two bridges on Sam Graham Road.

The Jefferson Davis County Board of Supervisors met for the second October meeting Monday.

James Townsend was first on the agenda and expressed concerns to the board of supervisors regarding two bridges closed on Sam Graham Road. The bridges have been closed for over two years. “It sure is hurting people on that road,” said Townsend. Townsend has a daughter who is a nurse that lives two miles from him. “She has to travel 10 miles out of the way just to get to our house when we need her. I’m begging you to fix the bridge.”  Both bridges cannot be repaired and are on the list to be replaced, but funding is currently not available. “The pilings under the bridges on Sam Graham are in such bad shape, there was no choice but to shut them down and wait on the funding to replace them,” said District 4 Supervisor Terry Mathis.

The statewide bridge crisis started in early 2017 and has warranted a great deal of county attention and resources since that time. It was common practice from the early 60s until the mid-80s to use timber, until concrete and steel became the norm. The crisis was brought on by a change in the way timber bridge components are condition rated.  This resulted in many bridge closures and postings across the state. Today there are 263 county bridges listed as closed and 1859 posted for low weight throughout the state.

Jefferson Davis County maintains a total of 108 bridges. In 2017, 35 bridges were determined to have significant timber components providing support to the bridges.

The county has spent approximately $400,000 of local funding, during this time, to maintain these bridges in a serviceable condition.

The county relies on State CHBP, State Aid and LSBP funds to totally replace the bridges once that funding is available. To date, the county has used these funds to replace nine bridges at the cost of over $4.6 million. Those nine bridges are located on Ebenezer Church Road, Kings Road, Graves Keys Road, Speights Road, two on Bass Burkett Road, South Williamsburg Road and Clem School Road. There are three bridges currently under contract for construction utilizing $1.8 million of state funding: Jones Ford Road, South Pleasant Hill Road and West St. Stephens Road. One bridge on Higgs Road was closed permanently. This leaves 22 bridges in need of repair or replacement in the county.

Since the bridge crisis began almost five years ago, the county has been forced to divert funds from their paving budgets to repair and replace bridges according to County Engineer Les Dungan. “As a consequence, we have seen the roadway surface conditions degrade at an accelerated pace,” said Dungan. “The need for additional funding for both bridge work and roadway paving is greater now than ever.” District 3 Supervisor Demarrio Booth and District 4 Supervisor Terry Mathis are attending a Mississippi Association of Supervisors meeting in Oxford this week and are hoping to get some answers on additional funding.

In other business, the board of supervisors approved the following without opposition before it adjourned:

Approved Board President signing letter of acceptance on CHBP projects