JDC in ‘perfect’ location for I-14 expansion 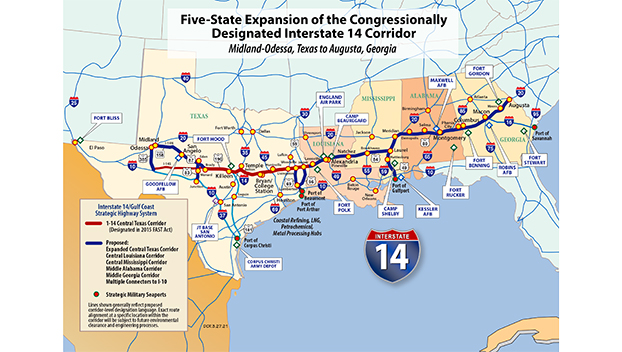 On Nov. 5,  The U.S. House of Representatives approved the $1 trillion Infrastructure Investment & Jobs Act (IIJA), which includes $450 billion for highway and public transportation investments and a new, five-year reauthorization of federal surface transportation programs. The legislation passed the House 228-206 and earned support from 215 Democrats and 13 Republicans.

Included in this package is building onto Interstate 14. The planned interstate corridor extends 1,300 miles from Interstate 10 in Texas to Interstate 20 in Augusta, Georgia, and would loosely follow U.S. 84’s current path across Mississippi, passing through Natchez, Brookhaven, Monticello, Prentiss, Collins, Laurel and Meridian before entering Alabama.

The House passed the measure 228-206 with the majority of support coming from the Democratic side of Congress. Thirteen Republicans supported the legislation and six Democrats opposed it once the original $2.25 trillion proposal that President Joe Biden unveiled in March, known as the American Jobs Plan, had been stripped down.

The infrastructure measure cleared the Senate in August a bipartisan 69-30 vote.

“The potential for development for I-14 in Jefferson Davis County is even greater than the potential for Hwy 84 development, said JDC Economic Development Director Gary Bass. “When you couple that with the growing hemp industry at the industrial park, then here comes the neighborhood.” Bass believes this will bring the higher traffic count that we have needed all along. “The fact that we are right in the center of I-55 and I-59 puts us in the perfect location.”

While Interstate 14 is still decades from completion, the Nov. 5 official designation is a first critical step toward it becoming a reality.