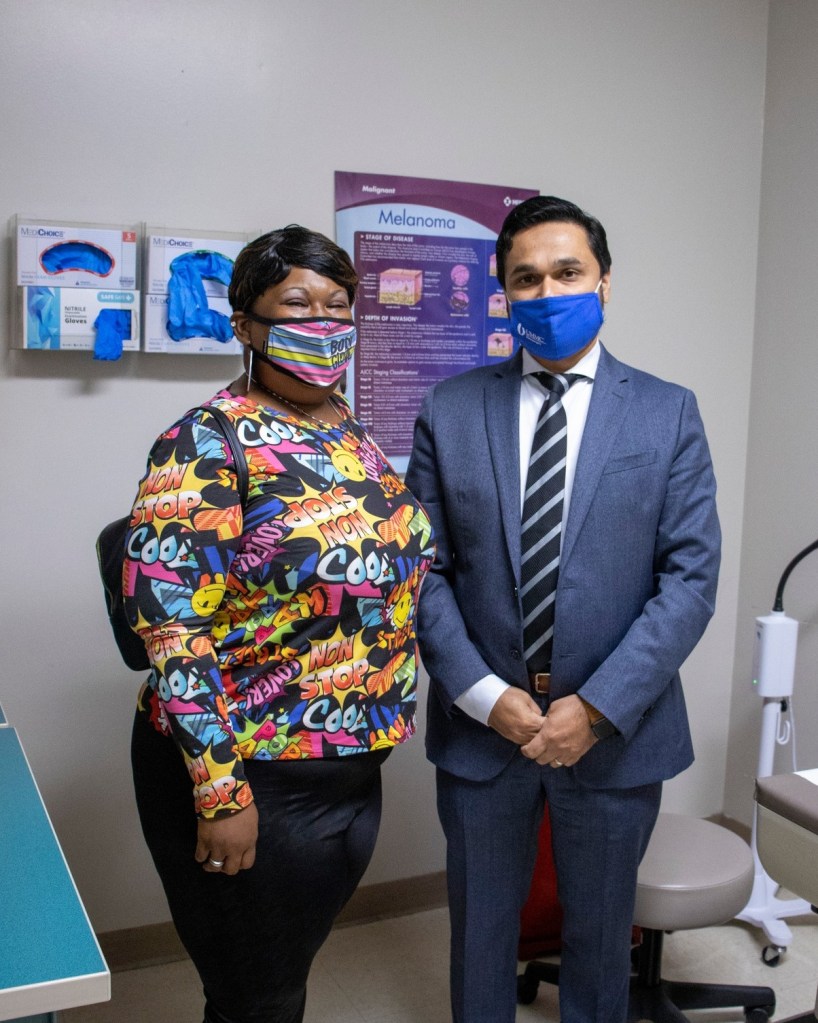 Tamika Larkin-Stowers with Dr. Omar Chohan during a follow-up appointment.

Driving down the highway, Tamika Larkin-Stowers, of Prentiss, went from laughing with her cousin to suddenly waking up to the sound of truck horns and panic in her cousin’s voice. She barely had time to swerve off the road to avoid a major collision and had no idea what just happened to her. This was her first experience having a noticeable seizure and the timing almost took her life.

Defined as an abnormal burst of electrical activity between brain cells, seizures come in all shapes and sizes. They can cause uncontrollable muscle tone or movements like twitching, stiffness, or even limpness. Some seizures create unusual sensations, thoughts, or total loss of consciousness while some occur completely unnoticed.

Larkin-Stowers’ near wreck occurred in 2008. After several more seizures, she was diagnosed with epilepsy. She tried nearly eight antiepileptic medications but continued to have breakthrough seizures. None of the medications kept her seizures fully at bay, and they started becoming more problematic causing tongue biting and even loss of bladder control. Unable to work, Larkin-Stowers kept an open mind. She began writing poetry to have a creative outlet.

Every case of epilepsy presents differently. Unfortunately for some, like Larkin-Stowers, medications do not work and everyday life becomes a challenge. In these situations, surgery might provide a glimmer of hope. A patient must have exhausted all medical options and must undergo several rounds of testing to be considered eligible for surgery.

The first step towards surgery is determining what type of seizure the patient has. An epileptologist will speak to the patient, family, spouse, or any witness of the seizures. Understanding characteristics of the seizure helps to make an assessment and categorize them as focal or generalized. A detailed MRI scan can then further subdivide epilepsy into “lesional” or “non-lesional”. Lesional epilepsy is often related to an abnormal area on brain MRI like a tumor or trauma. Non-lesional epilepsy generally means that the brain looks normal on MRI.

Next, the specific brain area that provokes a seizure must be determined. Localized or focal onset means the seizure starts in one part of the brain but may spread to others. Non-localizeable seizures mean that the exact part of the brain that triggers seizures cannot be identified or that seizures occur in widespread areas of the brain, sometimes simultaneously on both sides. Making this determination isn’t always easy. The patient is taken off all epilepsy medications and monitored in the hospital in order to capture an EEG reading during a seizure. The EEG shows brain activity and can reveal the starting location of the seizure. The next test is often a PET CT which looks at brain metabolism and identifies areas that share metabolic signatures of seizures. The hope is to have these various tests all identify the same area of the brain, called “epileptogenic” or seizure inducing.

Once these tests point towards a unique brain location for seizure onset, the patient will then speak with a neuropsychologist. Detailed neuropsychological testing along with a functional MRI and a specialized test called WADA test, will help determine whether the “epileptogenic” area of the brain can be safely removed.

Finally, the patient’s case is discussed at a multidisciplinary surgical epilepsy conference. This conference gathers everyone involved in the patient’s care to discuss their findings. A consensus is then sought to determine whether surgery, and often a specific type of surgery, would benefit the patient. Surgical options include resection, ablation, or neuro-modulation.

In 2017, Larkin-Stowers was admitted for the initial monitoring. She was monitored again in 2018. Both years showed that her seizures occurred on the right side of her brain. In 2019, Larkin-Stowers underwent neuropsychological testing to determine her cognitive function and how having epilepsy affected her overall brain function. Her results showed that she had enough “functional reserve” to support resection of the problem area on the right side of her brain. Her case was then presented to the epilepsy board. A unanimous conclusion was made that Larkin-Stowers was eligible for resective surgery.

During resective epilepsy surgery, the surgeon has to monitor brain activity to ensure complete resection of the areas responsible for seizure activity. To do this, small electrodes, or electrical conductors, are placed directly on the surface of the brain in several areas. Stimulating these electrodes allows the surgeon to delineate vital areas of the brain that control certain functions like motor, sensory, or language. Using the stimulations as a map, the surgeon knows what areas to avoid resecting and has a safety margin to follow. This process is called electrocorticography.

Skeptical of surgery, Larkin-Stowers spoke with Dr. Chohan about the risks and benefits of surgery. “I wanted to know who might be messing with my head,” Larkin-Stowers said. “I asked him to tell me something good about himself. He told me he did his job well, but the results were ultimately up to larger powers. With that answer, I decided it was time to humble myself and go ahead with the surgery. Trust in Dr. Chohan and God to help me out.”

Larkin-Stowers had surgery in February 2021. The procedure went smoothly. After a few nights in the hospital, she was able to go home to fully recover from surgery.

“The goal of surgery is to control the seizures. I am very pleased with her outcome, Tamika has done remarkably well,” Dr. Chohan said. Since her surgery in February, Larkin has not reported a single seizure.

“I am so glad I trusted in my Lord and He provided me with Dr. Chohan for surgery,” Larkin-Stowers said. Through her trials with epilepsy, she turned to poetry and prayer to relieve her stress. Free of the fear of losing control to a seizure, Larkin-Stowers has her life back but her experience with epilepsy opened her creative side forever. She still writes and shows gratitude through her words. Her book, Inspire Me, opens by saying, “Bad circumstances are only temporary, but your life’s work and wisdom lasts forever.” Larkin-Stowers is a 2000 graduate of Prentiss High School. Her parents are Sheila and Leon Larkin of the Galilee community. She has three sons and writes inspirational poetry.

Community tailgate to be held before the big game…