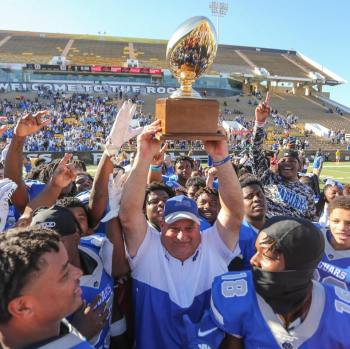 Jared Redding—JDCH Head Coach Lance Mancuso was named 3A Coach of the Year after winning the state championship Friday morning. 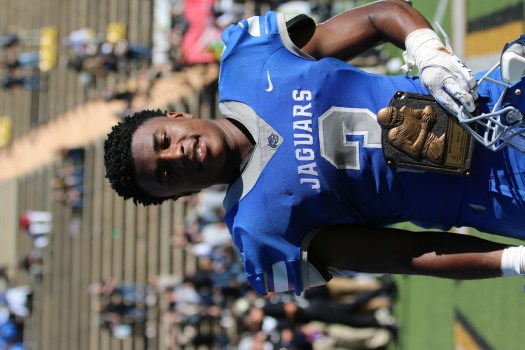 Jenny Hall / The Prentiss Headlight—Demarrio Booth Jr. was named MVP of the 3A State Championship Game.

For Mancuso, it is about the players going to class every day, being on time, being good role models and being good citizens of Jefferson Davis County.

“We are not doing what we do just to play football. All of the things we hold those young men accountable for is the reason we win championships, I believe. It is not just about selling ourselves out to a sport with a no matter what attitude. I believe it is about doing it the right way.

Mancuso gives credit to the administrators in the school district as well. “I am so thankful for their support and what they have done and being able to hold these young men to be accountable in their daily lives which is what allows them to reap the rewards of winning championships.”

Over a thousand fans from Jefferson Davis County attended the game Friday. “Our community is unbelievable. To look up there and see our community, our stakeholders, our councilmen from both towns, our mayors, everyone involved is just unbelievable. I want to thank everyone, and I pray for the continued effort to continually grow our athletes.”

Several players also received awards for their efforts during the 2021 season. Demarrio Booth, Malcolm Hartzog, Dedrian Alexander and Marcus Ross were all named to the 3A All-State Team. Booth was also awarded the Most Valuable Player of the championship game, Ross was awarded the 3A Scholar Athlete award and Hartzog was named the 3A Player of the Year.