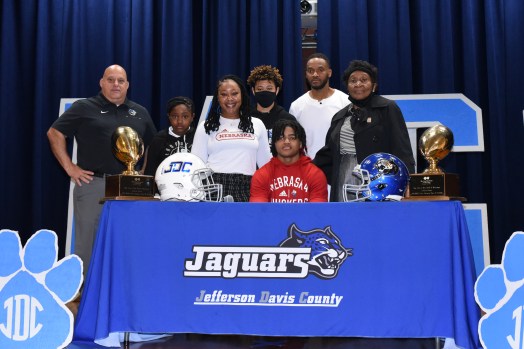 Holley Cochran / The Prentiss Headlight—JDCH senior Malcolm Hartzog with his family and JDCH Head Coach Lance Mancuso after signing his letter of intent to the University of Nebraska. 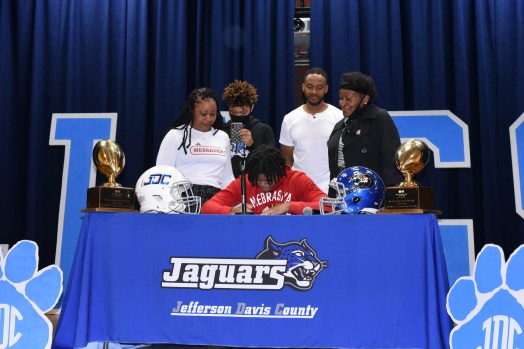 Holley Cochran / The Prentiss Headlight—JDCH senior Malcolm Hartzog signs his letter of intent to the University of Nebraska. 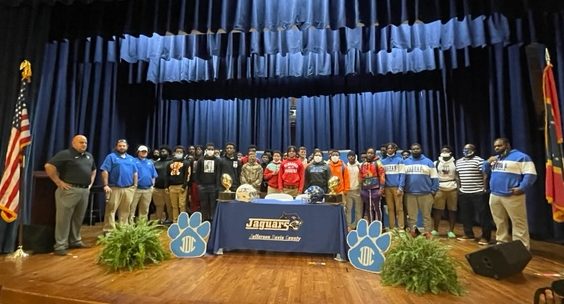 Jefferson Davis County High School senior Malcolm Hartzog signed his intent to the University of Nebraska Wednesday morning during early National Signing Day. Hartzog played running back and defensive back for the Jags during their 2021 3A state championship winning season.

“I am extremely excited about his opportunity to sign with a Power 5 school,” said Jefferson Davis County High School Head Coach Lance Mancuso. “It is one of the greatest accomplishments for a high school football player. We wish him the best of luck and we are just so proud of his chance to not only represent our school, but also his family, this community and Jefferson Davis County.”

This is the first Power 5 signee from Jefferson Davis County High School.

When asked why he chose Nebraska, Hartzog said, “They showed the most love. It felt like home.”

Jefferson Davis County High School Principal Robert Young says Hartzog is an outstanding student off the field and is very respectful to teachers and adults. “He is positive around the campus and a leader by example.  He is naturally smart, but also challenges himself academically.”

One example of his character off the field was when the school implemented precautions due to COVID and began delivering lunches to the classrooms.

“Malcolm volunteered to pick up the trash and trays every day because we were shorthanded. That’s the type of kid he is.” 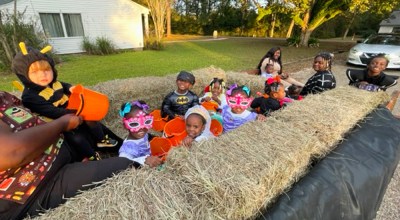