Multiple zoning variance requests presented to Prentiss Board of Aldermen 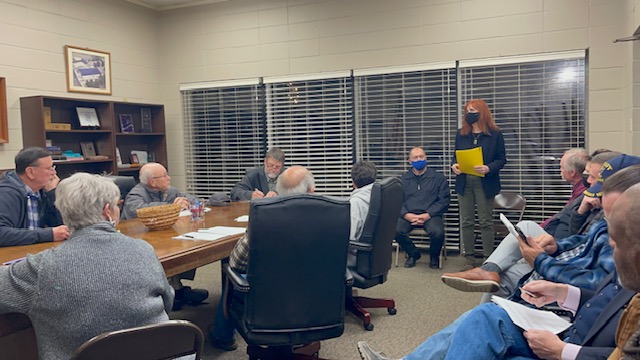 Holley Cochran / The Prentiss Headlight—Rhonda Phillips presents her plan to the Prentiss Board of Aldermen for an adult services center in Prentiss at the January meeting.

Zoning variances were the topic of conversation at the first January board meeting of the Prentiss Board of Aldermen.

Rhonda Phillips presented the board with a plan for an adult service center at the corner of Third Street and Mississippi Avenue, across from Prentiss Presbyterian Church.

Phillips is seeking to have a home that could serve as an adult day service center for predominately the elderly and Veterans, as well as others that need some sort of service. Those that might benefit from the program would be older adults that need assistance getting to the grocery store, doctors’ appointments or picking up necessities. “We want to help keep people living independently so they don’t have to go to a nursing home or assisted living,” said Phillips.

The center would be open Monday through Friday from 8 a.m. until 5 p.m., and according to Phillips is a quiet type of service that is not a medical facility, but more of a social activity.

“I feel like this is something we need to do. It is a vital community service.” Phillips reiterated that it was not a senior citizen center or assisted living facility, but a day service facility. Breakfast and lunch would be served, along with devotion, games, crafts and outings.

Phillips stated this is a great option for aging parents who live with their children. While they children are at work, their parents would be safe and cared for and have others to interact with.

“We chose a home that we felt like would be conducive to this type of service.” Phillips is initially targeting 10 people a day with a max of 20. There are federal regulations and state guidelines for these services.

“We wanted to come to Prentiss to do this because this is home, and

Phillips is very committed to community service and community development. She previously served as a city regional planner and economic development director.  She is currently a professor at Purdue University. “I am very committed to community development and community service, and I feel very strongly we want to be in Prentiss.” Phillips said she would have loved for this service to have been available for her mother. Phillips grew up in Prentiss and is a graduate of Prentiss Christian School.

A public hearing for a zoning variance for this property will be held Feb. 1 at 5:30 p.m. at Prentiss City Hall.

Zoning variances were previously requested in December for properties at 2429 Columbia Ave. and 1206 Berry Street. Stubbs Law Firm owns the property at 2429 Columbia Ave. and requested a zoning variance to mixed from residential. The firm plans to move the law office into the former Mikell home adjacent to the current office. “This is the only property left on the block that is residential,” said Prentiss Mayor Charley Dumas.  “It is basically blocked in with commercial and county property.”

What we need to look at is, is it something that would benefit the town without causing any hardship on any of our people,” said Alderman Randy Stamps. The zoning variance was approved unanimously for mixed use.

Several aldermen expressed concerns and reservations regarding a variance at 1206 Berry Street. The request for that property was for the operation of a nail shop in a portable building behind a residence. “I don’t come with a crowd or noise, they come and go one at a time during set appointment hours,” said the owner.

The board tabled that request for further discussion at a future meeting.

The board approved minutes and claims, and also approved Regions Bank and Hancock Whitney Bank for the town’s bank depositories before adjourning.

Kruger appointed as Director of the Mississippi Office of…