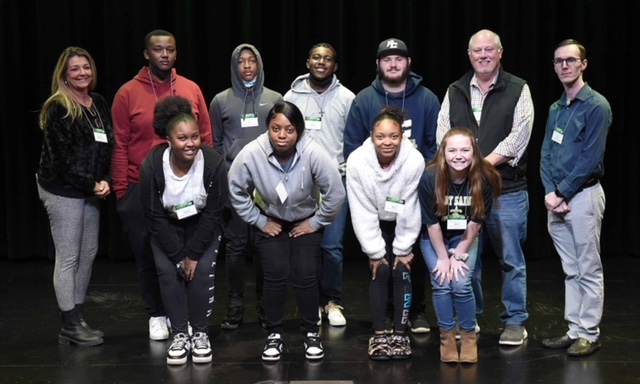 Members of the Mayors’ Youth Council of Jefferson Davis County attended the 14th Mississippi Municipal League Statewide Youth Leadership Summit last weekend at Delta State University. The purpose of the two-day Summit is to bring city officials and youth together to share their experiences of their programs and the impact made on the community. In addition, it establishes a forum where youth can interact and discuss issues and concerns that are important to them. As a result, the summit has been organized to promote a fun environment for youth and city officials to learn and network with each other.

“I believe the students received some great information that will benefit them in the short term and long run,” said Prentiss Mayor Charley Dumas. “Just the opportunity to see one of the state’s campuses that they might not ordinarily visit was good for them. They are a great group and it’s a pleasure to work with them.”

Council members were welcomed at a reception Friday night held at the Mississippi Grammy Museum. The following day they were able to attend group discussions such as Leadership Matters, Serving your Community, Change your Future, Social Media Dos and Don’ts and An Inside Look at Running a Mayor’s Youth Council.

“It was a great trip with this amazing group of young leaders representing our cities and county at our first Mayors’ Youth Council,” said Bassfield Mayor Angie Ladner. “It was important for me as an incoming mayor to make sure that our future, the kids, were an important part of my vision for this community. I see a very bright future for them all and I am very thankful to be in a position to help mentor these young leaders. It’s going to only get better for us all!”

The Summit is held at a Mississippi University each year, rotating between USM, Ole Miss, MSU, JSU and Delta State.

This year’s trip was paid for by a donation to the council. Mayors Dumas and Ladner formed the first ever Mayors’ Youth Council in Jefferson Davis County in November 2021. As part of the Mississippi Municipal League, a Mayor’s Youth Council is a group of young people working toward the common purpose of developing their individual leadership skills to strengthen their communities through volunteer service and increased communication with municipal leaders. Youth develop and lead initiatives with the support of the adult mentors.

Eight students from each high school were chosen by their principal to serve on the council. Two students from each class, freshmen through seniors, from Jefferson Davis County High School and Prentiss Christian School make up the group.