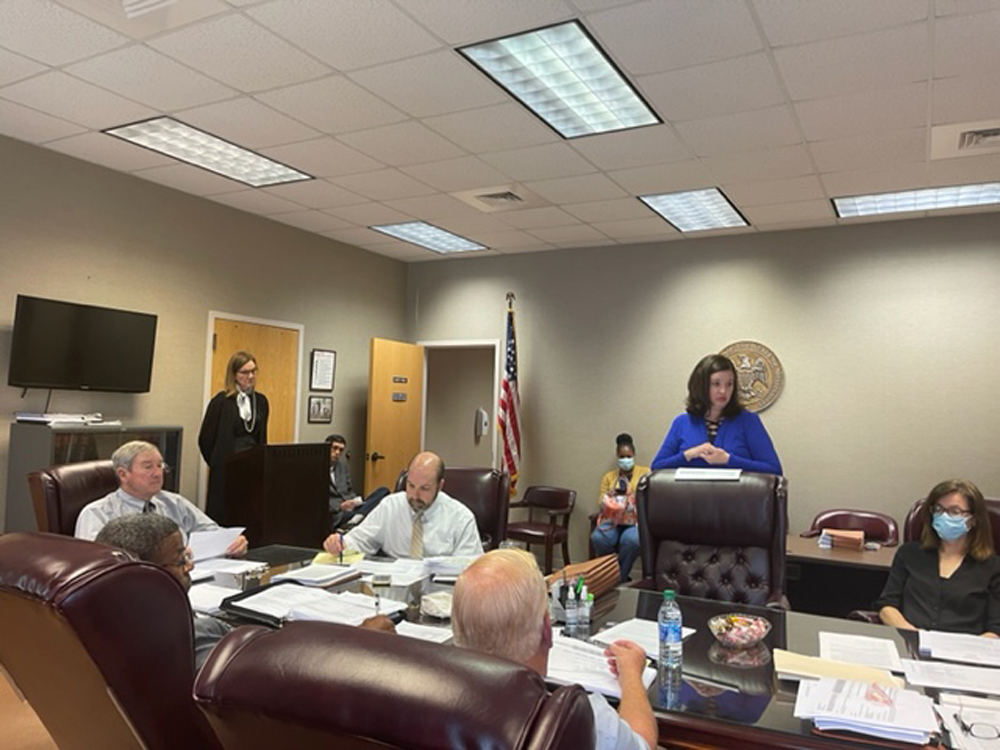 Holley Cochran / The Prentiss Headlight—Sue Fairbank with Butler Snow in Jackson (left) and Jefferson Davis County Board Accountant Cathy Slocum (right) discuss the process of the lease purchase agreement for the new detention center to be built in Prentiss.

“Approving the resolution would be approval also of the issuance of certificates of participation which would finance the facility in the amount of, not to exceed 7.8 million dollars,” said Fairbank. “We are also asking those certificates will be placed with The First bank in Hattiesburg at an interest rate of 2.30 percent.” Other documents in connection to the approval signed by the board are a lease to purchase agreement, a ground lease, a trust agreement and a private placement agreement.

The board approved to approve the resolution and all documents unanimously.

David Marsh of Benchmark Construction Corporation of Jackson will guide them through the process with plans, design and construction of the project.

The center will cost roughly $6.8 million dollars to build and will involve the need of additional tax revenue. The board plans to reallocate tax millage, as well as, raise the millage to offset the cost. According to the board, the millage increases will be small. For example, if you have a $100,000 home, it will cost an additional $1 to $3 a month or $12 to $36 a year. Currently, 1 mill equals approximately $95,000. The county anticipates increasing the millage 1.2 to 3 mills to allow for the construction and possible increase in operational and staffing costs. At present, there are 30 inmates in the Jefferson Davis County jail. The new detention center will house 52 inmates, which could cause a potential increase in expenses. The board will increase the millage for the 2022-2023 fiscal year.

The board began making plans for the new detention center in September 2021.

The four-acre site for the new center will be in Prentiss across just south of the Highway 13 and Highway 84 interchange at the frontage road.

Along with the 52-bed center, there will be separate areas for females and males and offices for the sheriff and staff. This property is already owned by the county and according to the supervisors, is a flat area that will only need minimal preparation. The board will begin dirt work on the site next week, weather permitting, with construction of the building beginning this summer.  The board is hopeful the center will be complete in 2023.

“Our biggest concern is the safety and security of the community,” said Rushing.

Jefferson Davis County Circuit Clerk Clint Langley made a request to have all marriage license books digitized, the item was tabled for future discussion.

The mask mandate for all county buildings remains in effect for the next month. The board will revisit the mandate in April.