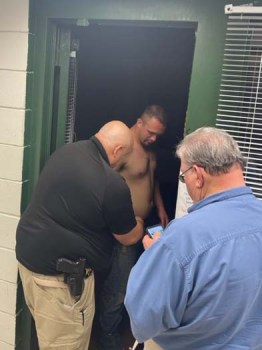 Holley Cochran / The Prentiss Headlight—Robert Kyle Hatley is booked into the Jefferson Davis County jail and charged with felony escape from a law enforcement official.

Holley Cochran / The Prentiss Headlight—Robert Kyle Hatley is back in the custody of the Jefferson Davis County Sheriff's Department after escaping from trash duty on St. Stephens Road March 30. 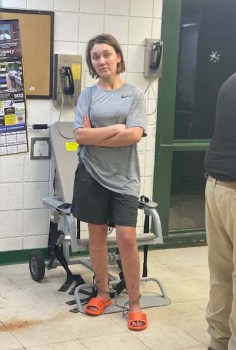 Holley Cochran / The Prentiss Headlight—Rachel Johnson picked up Hatley on St. Stephens Road and the two fled to North Mississippi where they were apprehended Thursday morning. 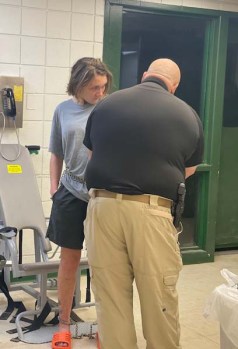 According to authorities, Hatley and Johnson ran from law enforcement officers in Panola County, wrecked the vehicle they were in and fled into the woods. U. S. Marhsals were called in to assist with the search, and after two days in the woods, the couple was apprehended Thursday morning.

Hatley, 24, of Collins, escaped from trash duty on March 30.  Carvis White, road supervisor for the Jefferson Davis County Sheriff’s Department, and Hatley were on East St. Stephens Road just outside of Prentiss when he was picked up and fled the area. White and Hatley were picking up trash when White went back to retrieve the truck to load the trash in. According to White, that is when Hatley was picked up in a white vehicle. Authorities believe Hatley’s girlfriend, Rachel Johnson, picked him up.

Hatley had requested trash duty to work off old fines he owed the county from a previous arrest. He was arrested March 19 by JDC deputies after he was indicted for grand larceny in connection with a catalytic convertor theft on Black Polk Road. He was indicted in Lincoln County and Franklin County prior to his arrest in JDC. He is also wanted for felony crimes in Lawrence and Covington County.

A BOLO and active warrant had been issued for Hatley and Johnson. Panola County officers were alerted to this when they attempted a traffic stop and the couple tried to outrun authorities.

Johnson was booked into the Jefferson Davis County jail and charged with accessory to escape. In addition to his previous charges, Hatley was charged with felony escape from a law enforcement official.

Johnson is awaiting a bond hearing at this time. Hatley’s bond has been revoked.