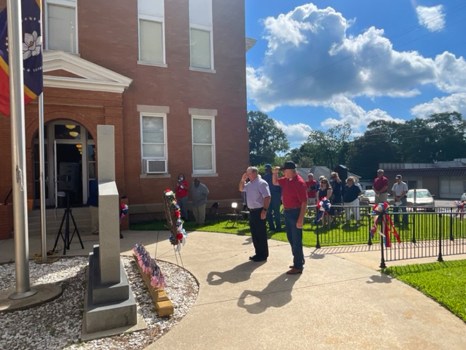 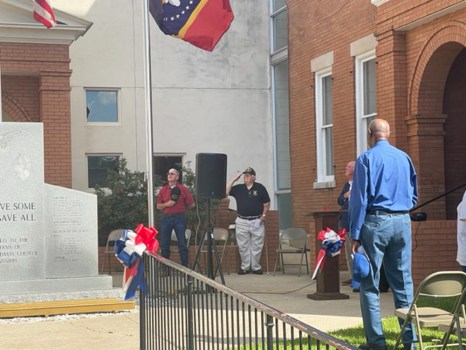 Holley Cochran / The Prentiss Headlight—The National Anthem was played following the Pledge of Allegiance at the beginning of the service. 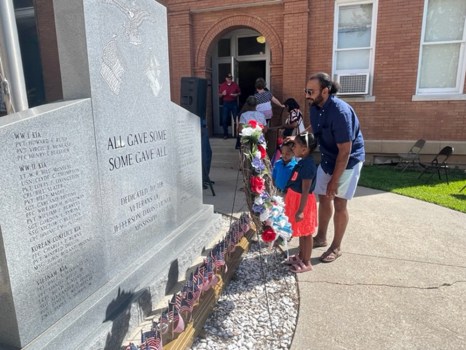 Holley Cochran / The Prentiss Headlight—Thomas Johnson brought his children six-year-old Zanna Rose Johnson and three-year-old Richmond Cole Johnson to pay their respects and see the monument for the soldiers. Johnson’s family is from Jefferson Davis County. 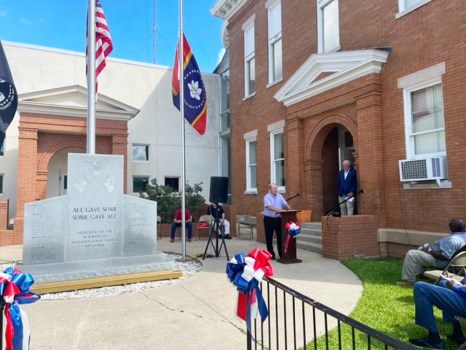 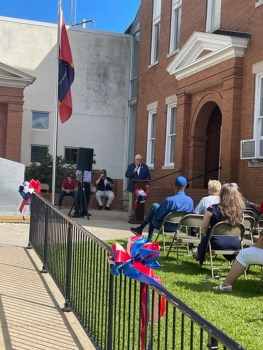 Holley Cochran / The Prentiss Headlight—A welcome was given by Prentiss Mayor Charley Dumas. 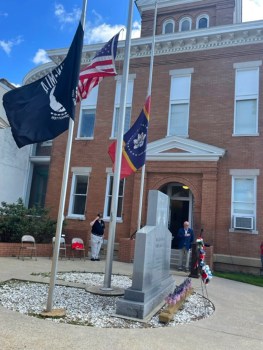 Holley Cochran / The Prentiss Headlight—Taps was played at the conclusion of the service. 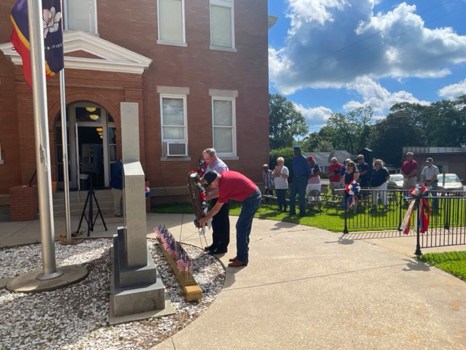 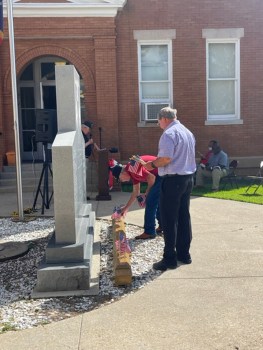 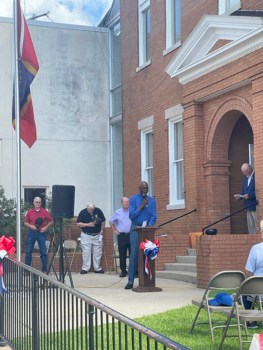 Holley Cochran / The Prentiss Headlight—Prayer was given by Rev. Jessie Holloway at the beginning of the service.

It was a beautiful morning for the Memorial Day program held Monday at the Jefferson Davis County Courthouse. The welcome was given by Prentiss Mayor Charley Dumas. “We not only remember the names written on our monument, but those on tombstones around our country in military graveyards and those countless number of unmarked graves that have sacrificed and served our country,” said Prentiss Mayor Charley Dumas.

Dumas then read these words, “Memorial Day will be the most expensive holiday on the calendar. Every hotdog, every burger, every spin around the lake, or drink with friends is a debt, purchased by others. This day is not about who served, that day comes in the fall.
This one is in honor of those who paid in life and blood; whose mom never saw them again, whose dad wept in private, whose wife raised the kids alone, and whose kids only remembered them from pictures. This isn’t simply a day off. This is a day to remember that others paid for every free breath you ever get to take.”
The Pledge of Allegiance and National Anthem was then led by Sgt. Joe Bridges followed by a prayer given by Rev. Jessie Holloway.

He gave a brief history of Memorial Day which was called Decoration Day when it originated in 1868. In 1971, Congress standardized the holiday as Memorial Day and made its observance the last Monday in May.

Sgt. Bridges served in the Vietnam War and noted there were 662 Vietnam Veterans in Mississippi lost and a total of 58,382 in the United States. “We come today to honor all those lost, and to remember their families. Those are the ones hurting,” said Sgt. Bridges “This weekend is one of the most celebrated weekends we have throughout the year, and we are here to honor these we lost in Jefferson Davis County. These are our heroes.”
Walt Moeller followed with the reading of the names of the soldiers from Jefferson Davis County killed in action as flags placed at the monument.
Those killed in action in WWI were: Pvt. Howard E. Rush, Pvt. Virgil E. McNease, Pfc Henry T. Bullock. Lt. W.R. “Bill” McNeese, Usn Clyde C. Thompson, Pfc Willard H. Holloway, Sgt. Gordon L. Tyrone, Pvt. Louis E. Livingston, Cpl. Bill Slater, Sgt. Garland Broome, Pvt. William E. Burkett, Ssg. Victor E. Bullock, Cpl. Irving J. MacIntosh and Pvt. Billy Magee were all killed in WWII.
Killed in the Korean Conflict were: Pfc. Charles P. Burns, Msg. John Roland McInnis, Pvt. Winfred Dillon and Ssg. Robert D. Hall. Pfc. Paul V. Harrington, Lcpl. Billie A. Allen, Pfc. James E. Weathersby, Pfc. Daniel Reese Jr., Sgt. Alexander A. Peoples and Cwo. James A. Morris Jr. were killed in Vietnam.
Prisoners of war from WWII were Pvt. Samuel L. Raynes, Pvt. Earl Roberts, Ssg. Ralph Brinson, Sgt. George W. Thurman, Cpt. Morgan A. Whitfield, Sgt. Claude L. Burkett and Pfc. Willie J. Thompson. Cpl. Nathaniel Booth was a prisoner of war during the Korean Conflict.

Sp4 Marvin L. Hall was killed in the line of duty during the Vietnam War.

At the conclusion of the ceremony, a wreath was placed at the monument followed by the playing of Taps.