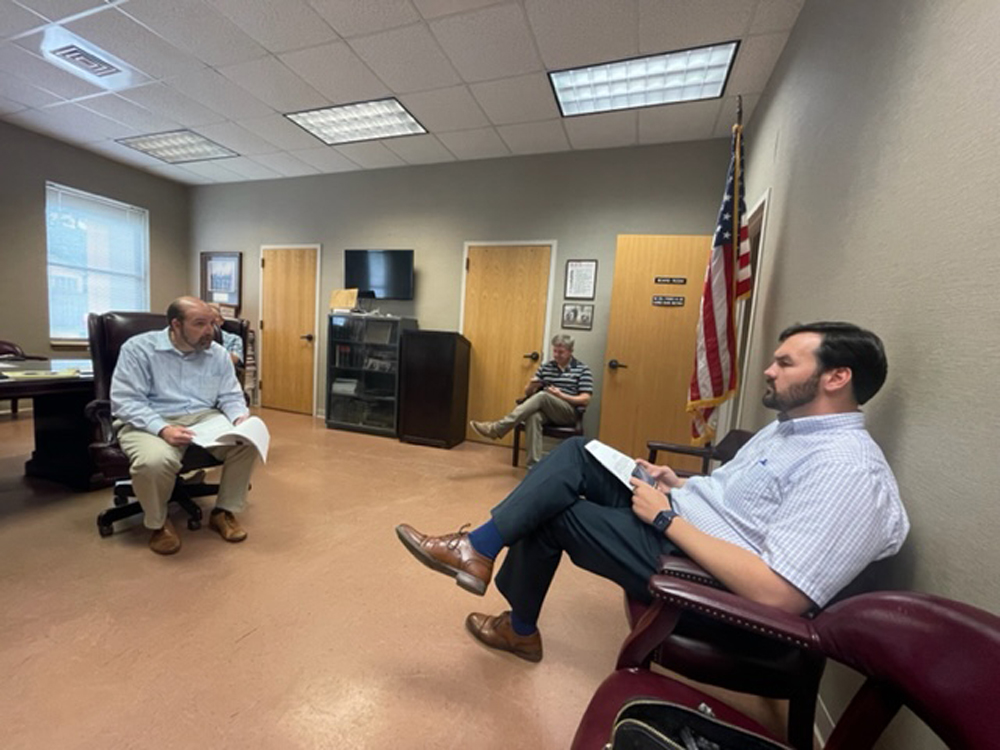 Members of the Mississippi State Senate and House of Representatives were in Jefferson Davis County Tuesday meeting with the board of supervisors. Sen. Joey Fillingane and Rep. Noah Sanford met with the board during a special called meeting regarding the first agenda item, “Discussion with state representatives on county matters.”

The legislature approved pay raises for supervisors statewide earlier this month and becomes a law on July 1. Supervisors are paid based on the assessed valuation of the county. A similar law was passed in 2020. After the JDC Board of Supervisors received that salary increase, Mississippi State Auditor Shad White announced that the salary increases, in the sum of $9,018.64, were inappropriate and that JDC was not entitled to the raise because the overall assessed value of the county had dropped over the years. The board immediately corrected the issue, and the status was listed as paid in full and settled to the appropriate fund directly.

“The board currently is seeking guidance on whether they can legally accept this raise based on the county’s current assessed valuation,” said Daughdrill.  “We do not want to face a similar situation as before.” The last time the Jefferson Davis County Board of Supervisors received a salary increase was in 2004. Fillingane and Sanford will assist the board in gaining clarity regarding the new increase.

Also on the agenda was the discussion of hot mix bid and approve change order on new jail facility.

The hot mix bid was already in place with W. E. Blaine and Sons. After Blaine made a company name change, the order was updated to APAC.

The board approved a change order regarding the new jail facility. The board originally decided to do the site prep for the jail themselves. “They cleared the site and removed the debris, but once bushhog season and paving season began, it became more than could be handled with county forces,” said Daughdrill. The board decided to allow Benchmark to take care of the dirt work in addition to what the county has completed. There was some concern regarding the loading of the dirt to be hauled to the site, so a call was made to David Marsh of Benchmark for clarity. “I would rather clear the problem up now than later,” said Marsh. The board also expressed concerned to Marsh regarding the number of parking spaces at the site and the need for a possible canopy over a walkway which will be discussed further in the future. The change order was approved, and the meeting was adjourned.

During the regularly scheduled meeting of the supervisors held June 20, the board approved the agenda and accepted a bid for cold mix from Dunn Road Builders.

The board tabled a discussion regarding the closing of Bass Burkett Road in Bassfield until the next regular meeting. The board requested JDC Superintendent Ike Haynes be present at that July meeting.

In other news, the board approved the following without opposition before the meeting was adjourned: