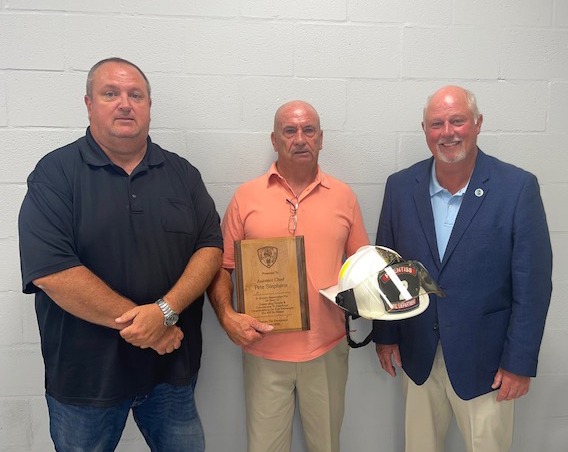 Pete Stephens was honored Tuesday night for his service to the Prentiss Fire Department. Stephens has been with the department for 28 years before his retirement in June. A reception was held at the Ronald W. Jones Memorial Complex for Stephens where he was presented with a plaque by Mayor Charley Dumas which reads, “Presented to assistant chief Pete Stephens in sincere appreciation for 28 years of outstanding service and commitment to excellence. Congratulations on your retirement, you will be missed.” Stephens was also given a fire helmet by Prentiss Fire Chief Wayne Bass and several other going away gifts.

Although he is retired from his official capacity, he still will be serving as a volunteer fireman. “To me that speaks volumes about what type of person Pete is,” said Prentiss Mayor Charley Dumas. “It takes a lot for a person to put on turn-out gear and respond to a burning building or respond to a wreck for that length of time, then to retire and decide he still wants to be a part of it. That is what makes this community so great.”

“It is a tremendous thing for someone like him to be a part of this town and we are very thankful for him,” Dumas added.

Prentiss Fire Chief Wayne Bass has worked with Stephens for 27 years and said they had laughed together and complained together and had their fair share of emergencies and tragedies. “Pete, you have been a great friend and a great co-worker,” said Bass. “I am truly saddened to see this chapter of our lives end and good luck with the rest of your story.”

Stephens gave a brief history of his tenure during his acceptance speech. He started with Bassfield Fire Department right out of high school at the end of 1979. Stephens said they had a 1970 Ford pumper truck and a 1963 Chevy pick-up. Their turnout gear consisted of a helmet, long coat and rubber boots. The firemen were called out by phone to a fire and the fire phone rang several different residents at once along with city hall. “Each firemen’s wife and mother had a list of two or three names to call after that,” said Stephens. Later in the 80s the department was able to get a new truck and radar and pager system. Stephens served under several fire chiefs in Bassfield including Billy Gale Carraway, Ken Carraway and Tommy Dewitt. Through fundraisers, the first set of Jaws of Life in the county was purchased by Bassfield.

Stephens recalled the first run the Jaws went on was to a rollover accident on Highway 42 West just outside of Prentiss resulting in one fatality. “There is a golf tournament in his memory today.” The first fire Stephens remembers actually fighting was when the old Texaco station burned in Bassfield. Until then he had been the tanker driver. It was a hot summer day and Chief Ken Carraway had been inside fighting the fire for some time. “He came out and told me to get on an air pack and I looked at him like he was crazy. After that I couldn’t wait for the next fire.” During this time, there was only the Bassfield Fire Department and the Prentiss Fire Department, no substations. In August 1994, Stephens went to the fire academy after Prentiss Mayor Tut Williams asked his brother if he knew anyone interested in going. At this time, Bud Bass had just retired from Jackson Fire Department and was the fire chief at 84 West and over the training of the Prentiss volunteers. “He was more like a mentor to me. He always had good advice and checked on me at the end of every week,” said Stephens.

During his career in Prentiss, he worked under fire chief Howard Kelly and current chief Wayne Bass as well as many other volunteers that made his job much easier. “Without them the fireman on duty is nothing. We are family. It’s been a heck of a 28 years.” 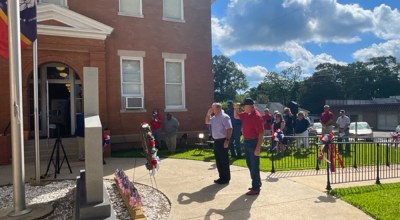 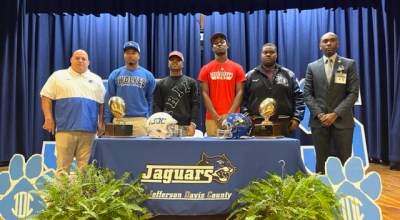