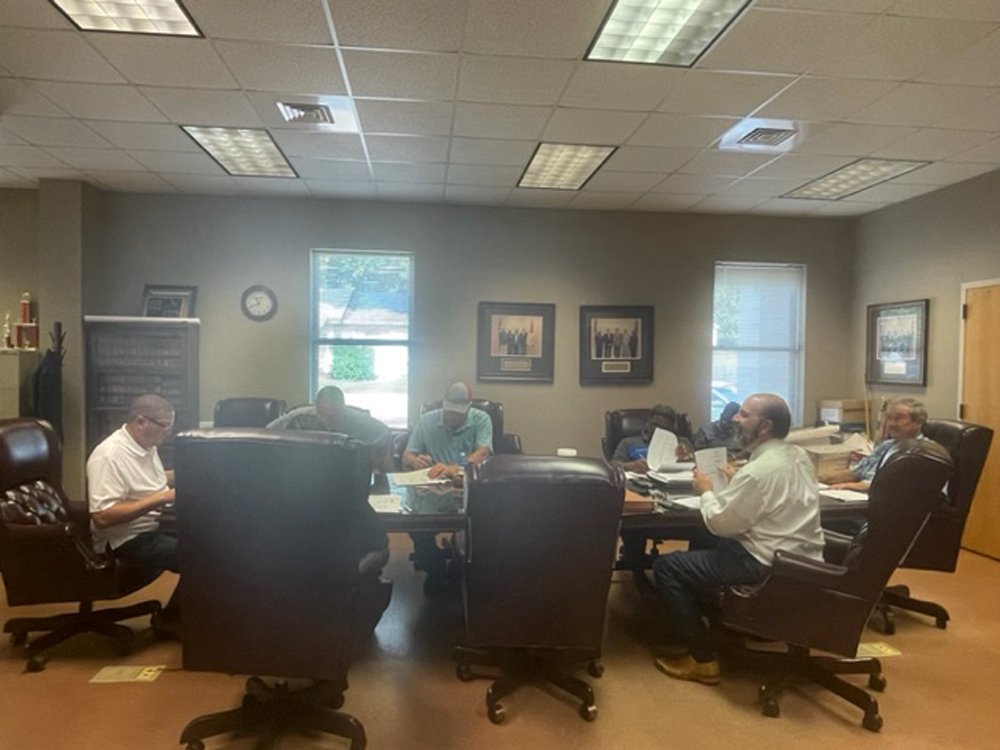 Holley Cochran / The Prentiss Headlight—Jefferson Davis County Board Attorney Wes Daughdrill gives his report Monday morning during the second board meeting of September.

The Jefferson Davis County Board of Supervisors met Monday for the second meeting in September in the board room in Prentiss. Corky Holliman opened with prayer before the minutes were approved.

JDC Veterans Officer Joe Bridges informed the board of the plans for the first annual Veterans Day Parade and Car Show to be held Nov. 12 in Prentiss.

The board continued the discussion of the abuse of the dumpster located in alleyway behind the JDC Sheriff’s Department and how to rectify the situation, so the dumpster is only accessible to those allowed to use it.

Paving in the county will continue Oct. 2. The board agreed to pave the drive around the John Thompson Athletic Complex in Bassfield which will also provide a place to walk for those wanting to exercise.

Turnarounds in District 1 at 105 Dickens Dyess Road, District 3 at 99 Crossroads Church Road and Carl Griffith Lane and District 4 at 609 Old Highway 84 East and 611 Old Highway 84 Extension were all continued until a future meeting.

Board attorney Wes Daughdrill continued the discussion regarding the construction permits that will now be required in the county. After the legislature passed MS HB 1163, each county in the state shall require permitting as a condition to construction within the unincorporated areas of the county. No permit for the county has been finalized.

In other news, the board approved the following without opposition before adjourning:

•Approved publishing the notice of garbage and rubbish collection and disposal information in The Prentiss Headlight.

• Approved board president signing resolution and other documentation for the Cafeteria Plan.

• Approved spreading into the minutes the PEER Review Report.

• Approved spreading into the minutes the HOME project closeout.

• Approved spreading into the minutes a resolution fixing and levying taxes for the Town of Prentiss.

• Approved spreading into the minutes the Certificate of Recapitulation of Real and Personal Rolls received by the State.

• Approved acceptance of the 2020 Personal Property Insolvency List and spreading into the minutes. (List turned over to Southern Finance for collection.)

• Approved acceptance of the 2020 Mobile Home Delinquent Tax List and spreading into the minutes. (List turned over to Southern Finance for collection.)

• Approved board president signing the Application for Certification to expend one mill.

• Approved replacement of tire in District 5.

• Approved reimbursement on taxes due to office error-paid on wrong parcel.

• Approved removing items from inventory for Justice Court and District 4. All items taken to landfill.

• Approved spreading into the minutes employee action forms for the Sheriff’s Department.

• Approved payment of invoice to Fisher Brown Bottrell Insurance for workman’s comp in the amount of $25,971.00.