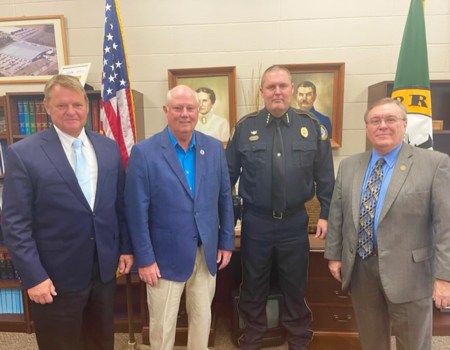 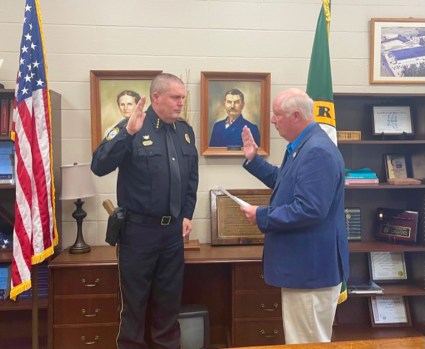 Holley Cochran / The Prentiss Headlight—Richard Browning is sworn in by Prentiss Mayor Charley Dumas as the new Prentiss Police Chief.

Prentiss has a new police chief, but he is a familiar face. Richard Browning was sworn in last week by Prentiss Mayor Charley Dumas as the new chief. Browning replaces Joe Bullock who resigned after serving as chief for over seven years.

Browning started out with the Prentiss Police Department in 2015 as a patrolman. He served as a sergeant and sergeant detective before being promoted to assistant chief in 2021.

Two notable cases Browning assisted in solving were Desmond Fortenberry who received 30 years for murder, and Eric Jones who received life for trafficking a controlled substance.

“I thank the Town of Prentiss for this opportunity as well as the district attorney’s office,” said Browning. Browning says he gained much respect for the office once he became a detective.

“I wouldn’t be where I am today without the district attorney’s office leading me in the direction. I think we are a good one-two punch for getting criminals off the street and protecting the Town of Prentiss and Jeff Davis and I look forward to being able to train my guys to emulate that.”

“You, probably more than anyone I know, have got one of the best hearts as far as doing the right thing for a town,” said Kittrell. “You have been straight as an arrow, done exactly what the law says you should do, and you don’t abide by anything less than that.” Kittrell said it has been a pleasure for his office to work with Browning. “It has been right down the lane and that is what we need, but your heart is what got you here.”

Kittrell and his office will continue to partner with Browning every day. “Thank you for being on board and I appreciate the Town of Prentiss for your employment and we look forward to the continued association.”

Browning started his career as a United States air Force Law Enforcement specialist in 1990 and is a Desert Storm Veteran. He moved to Mississippi in 2005 and worked at the Columbia Police Department before coming to Prentiss.