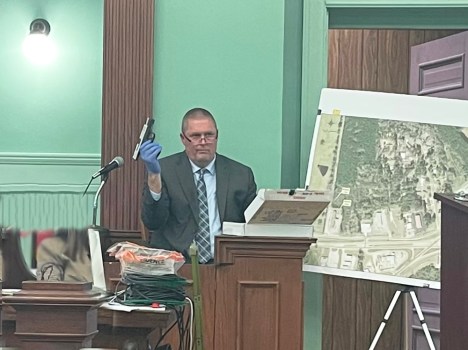 Holley Cochran / The Prentiss Headlight—Prentiss Police Chief Richard Browning holds up the 9mm gun that was used in the Hancock Bank robbery in May 2021. 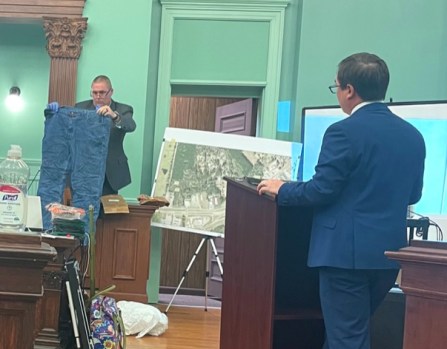 Eric LaShay Boykin has been found guilty in the robbery of Hancock Bank in Prentiss.

Boykin was indicted by a grand jury in Jefferson Davis County and charged with three counts of armed robbery and one count possession of a firearm by a convicted felon.

Fifteenth Circuit Judge Tony Mozingo presided over the trial that concluded Oct. 4. Boykin chose not to be present during the trial. He was represented in absentia by Public Defender Benton Evans.

The trial was originally scheduled for last week, but was postponed after Boykin caused a disruption in the courtroom.

Prosecutors from the 15th District Attorney’s Office called employees of the bank, employees from the Fleetway Shell adjacent to the bank and law enforcement officials as witnesses.

According to bank employees, Boykin entered the bank and jumped over the short security door to the teller area at which time he pulled out and cocked a 9mm handgun.

One employee was able to make her way back to an office and call for authorities.

Two employees were left in the teller area with Boykin. He demanded money, but one teller had just returned from lunch, so her drawer was locked. He proceeded to the drive through teller and took her drawer, spilling the money in the process. He demanded the two employees help him gather the money, which they did, and he left. Video surveillance from the Shell station show him entering a wooded area behind the gas station.

Boykin was eventually arrested and taken into custody behind the Department Human Services building at 1185 Frontage Road in Prentiss after the K-9 units alerted officers of his location.

Prentiss Police Chief Richard Browning was the lead investigator at the time of the robbery. He testified that he retrieved money and clothing in the woods behind the Shell station, in a ravine behind Jefferson Heights and throughout the subdivision. All money and clothing items contained red dye from the dye packs that Hancock Bank uses during a robbery. Boykin was holding a tote containing the handgun and additional money when he was arrested. A total of $48,490 was stolen from the bank. Every dollar was recovered by authorities.

After the two-day trial, the jury found Boykin guilty of two counts of armed robbery for the two employees behind the teller station. He was also found guilty of one count of possession of a firearm by a convicted felon. He was found not guilty of one count of armed robbery which was in relation to the Hancock employee that stepped away from the teller area to call for help and was not present when the money was taken. Boykin’s prior charge was for possession of a controlled substance out of Gulfport.

Boykin will be sentenced by Judge Tony Mozingo Friday at the Jefferson Davis County Courthouse.