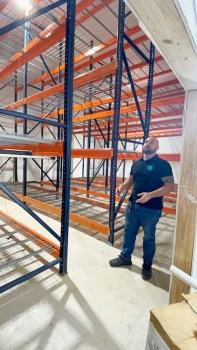 Holley Cochran / The Prentiss Headlight—One of the seven grow rooms at MGO. Each of the seven rooms are individually controlled in its own environment. If there is a problem in one room, it wont affect the other. 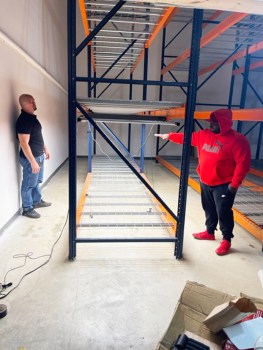 Holley Cochran / The Prentiss Headlight—MGO Director of Operations Mike Yarborough and CEO Winston Ceasear demonstrate how the lighting will work on one of the four rack tier systems. 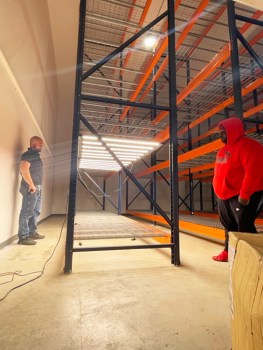 It is located in the former Griffith’s Tire warehouse on  John Street Extension, but the company has also leased the yellow KLH building from the Town of Prentiss. The yellow building will be an exact duplicate of the original MGO building, increasing the square footage of the company from 30,000 to 100,000.

According to Ceasear, he is still going through the application process with the state.

“At 100,000 square feet, we feel like we are one of the powerhouses in the state right now,” said Moore. The company plans to have their equipment in place in roughly four weeks.

With 10 full-time employees currently, the company will exceed the original estimate of 30 jobs. “We feel like in the next two years this will be a facility that will employ up to 65 people,” said Moore.

Ceasear says their main focus is the patients and having a quality product at a fair price point.

“The state has got to work out its quirks as far as regulation, enforcement and compliance,” said Ceasear.

“Right now there is a lot of cloudiness about what you can and can’t do, and what they are going to allow you to do.”

The two are looking forward to obtaining their license and starting production.

They feel everything will be ready for distribution during the second quarter of 2023.

“What we are doing in Jeff Davis is also a community and economic development impact and we feel that for Jeff Davis and the Town of Prentiss, this will be the number one facility in the whole state,” said Moore.