Voters in JDC have different ballots for Nov. 8 General Election 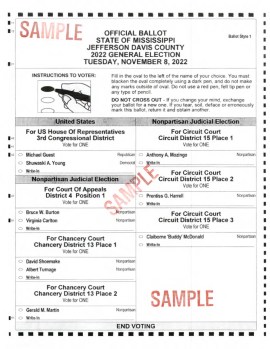 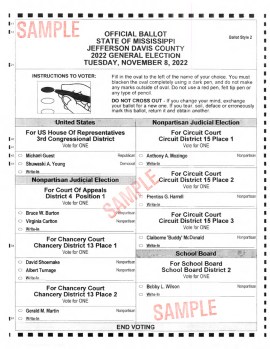 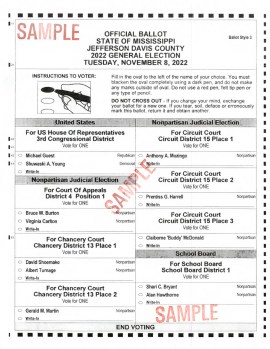 The ballots are set and ready for the general election on Nov. 8. There are three different ballets for Jefferson Davis County.

The election of school board members in Jefferson Davis County is staggered.

Shari Bryant and Alan Hawthorne have qualified for the school board in District 1. Bobby Wilson is unopposed in District 2.

All three candidates filed a Statement of Intent and Petition containing the signature of not less than 50 qualified voters of the district with the Jefferson Davis County Circuit Clerk. Each board member serves a term of six years.

Also on the ballot are the District 13 Chancery Court Judge positions. David Shoemake and Albert Turnage are running in Place 1. Gerald Martin is running unopposed in Place 2.

Mississippi Governor Tate Reeves will appoint someone to fill Mozingo’s position until a special election can be held in November 2023 since the ballot had already been finalized.

Also on the General Election ballot are the elections of the U. S. House of Representatives and the Mississippi Court of Appeals.