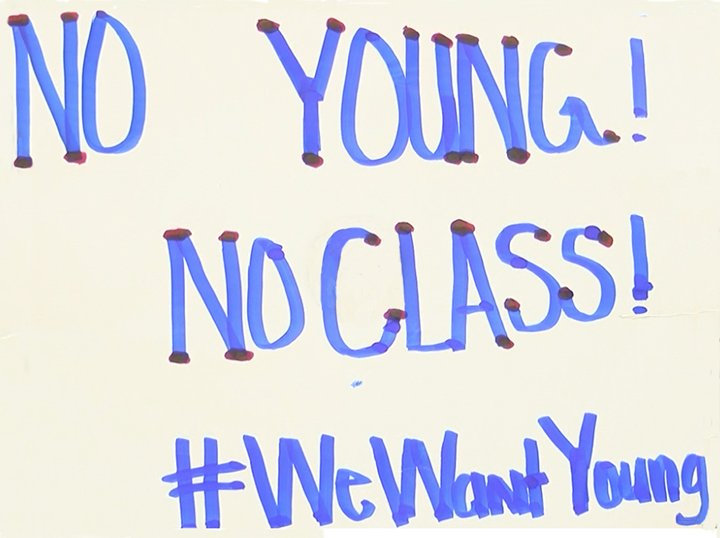 JDCH students held signs Monday morning in protest of the reassingment of the principal to another campus.

JDC Superintendent Ike Haynes announced the change in a letter sent to students and parents on Dec. 2.

“Respectfully, I am writing to inform you that there will be a change in school leadership at Jefferson Davis County High School effective Monday, Dec. 5, 2022.

I would like to thank Mr. Robert Young for his service as the high school principal for the past 16 months. Mr. Young will continue to serve in a leadership position as our Alternative School Administrator.

Dr. Jason Mcleod will serve as the interim principal for Jefferson Davis County High School for the remainder of this school year with direct support from Dr. Debra Dace, Chief Academic Officer. The two embody a number of years of experience in school leadership and are looking forward to serving the high school students, faculty and staff, and community.

Please know that a lot of thought and consideration was given to this decision and that this decision was made with the best interests of our students and school community in mind.”

In an effort to give the students a platform to voice their concerns, Haynes called an assembly to provide an opportunity for them to do so.

After the assembly, several students went outside and spoke with news outlets in the area. Junior Prince Copeland was one of those students. “We need to succeed in life, and Mr. Young gave us that foundation that we can walk on, so I just feel like they’re knocking us all down when they take Mr. Young out the school district,” said Copeland.

“Our former principal has been wrongfully demoted, and we all feel that he has been such an impact on our lives. He shouldn’t be removed at our school district,” he added.

Some students didn’t feel like Haynes was listening during the assembly. “He was giving us an opportunity to speak our mind. Every time somebody got up there to say something, and after they’d go back to their seat, he would send them out,” said Sophomore Lily Gregory.

“When I first started, I didn’t really fit in. Mr. Young was the only person that would talk to me every day and make sure I was okay,” Gregory added.

Parents also reported that they are concerned about Dr. Dace, who resigned from the Greenville Public School District. According to the Delta Democrat-Times, Dace was suspended for seven days for “failing to appropriately communicate with and/or misled  the board regarding the procurement of services and materials from Kids First Education, LLC.

A second letter from Haynes was released to the media on Monday morning today stating:

“Jefferson Davis County School District is faced with a personnel issue. We will deal with it as such. This is an ongoing investigation. At its conclusion, all facts will be made available to the school board. The district will not be sidetracked. This matter will be handled by the Superintendent and Board of Trustees.”

According to JDC School Board President Shonda Ard Burre, this reassignment did not come before the board and was not a board decision.