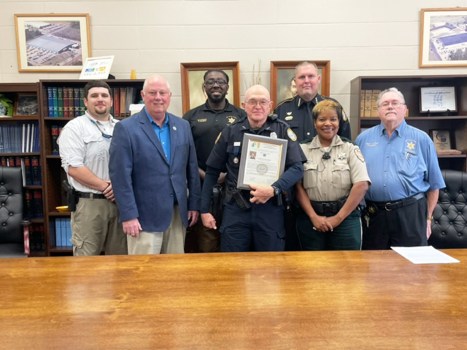 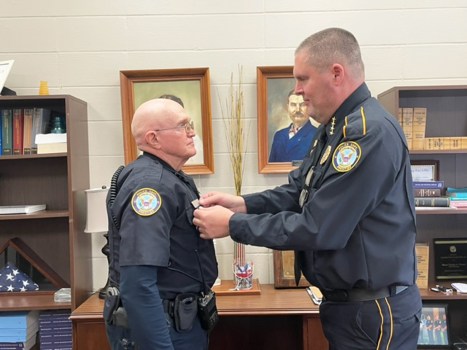 Prentiss Police Chief Richard Browning (right) pins a Medal of Valor on Prentiss Police Officer David Berry after he entered a burning building to save residents inside. 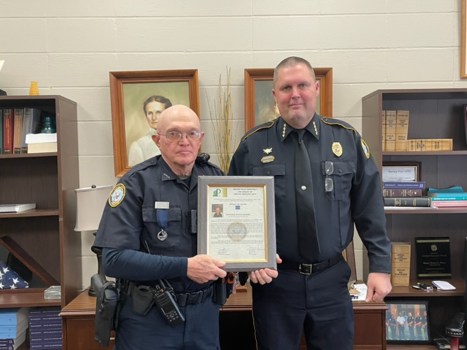 Prentiss Police Officer David Berry (center) is pictured with Prentiss Mayor Charley Dumas and Prentiss Police Chief Richard Browning after being presented a an Official Citation and Medal of Valor for his act of heroism and bravery in an apartment fire in Prentiss in November. Also pictured are: Prentiss Police Officer Kolby Waldrop, and members of the Jefferson Davis County Sheriff's Department Stephanie Barnes, Vernon Dampier and John Wayne Tolar .

On Nov. 14, Berry responded to a structure fire on First Street behind the Antique Thrift Store in the original business district in the Town of Prentiss.

When he arrived, he found one of the apartments engulfed in flames. Berry found the female that lived there in the threshold of the apartment going in and out of consciousness.

After securing her, Berry, at personal risk of injury or death, entered the apartment as he believed other victims were within the structure.

He entered a second time to retrieve a burning mattress to slow the progression of the fire until responding fire personnel could arrive to save the block.

His second entry into the apartment nearly became fatal as the entire apartment had become engulfed. Berry attempted re-entry a third time to continue his quest to slow the fire.

He was able to give the fire department the needed time to arrive and extinguish the fire thus saving the main street historical building adjacent to the structure.

“On this day, Officer Berry showed what he is made of as his heart outweighed his subconscious desire for personal safety,” said Prentiss Police Chief Richard Browning.

“I have known for several years and know what kind of officer he is and his actions this day did not surprise me. He demonstrated a degree of selflessness, personal courage and devotion to duty and his bravery is in keeping with the finest traditions of law enforcement heroism.”