Gas prices continue to fall across the state 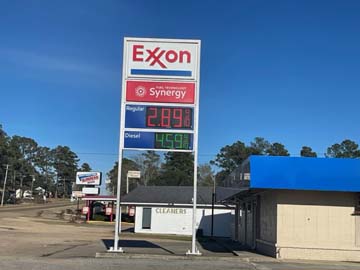 Holley Cochran / The Prentiss Headlight—Gas at the Exxon in Prentiss was $2.89 Tuesday afternoon.

Average gasoline prices in Mississippi have fallen 4.8 cents per gallon in the last week, averaging $2.67/g Monday. The data comes from GasBuddy’s survey of 2,014 stations in Mississippi.

The cheapest station in Mississippi was priced at $2.32/g Sunday, Christmas Day, while the most expensive was $3.24/g, a difference of 92.0 cents per gallon.

Gas at all five Prentiss stations is at $2.89 a gallon as of Tuesday afternoon.

Historical gasoline prices in Mississippi and the national average going back 10 years on Dec. 26:

“While the national average declined for the seventh straight week, with oil prices rallying, it remains to be seen if we will manage another week of gasoline price declines. We’re still waiting for the national average to fall below $3 per gallon, something that is suddenly a bit less likely given the extreme cold weather, interrupting refining operations in the south, curbing gasoline production and potentially driving prices up slightly,” said Patrick De Haan, head of petroleum analysis at GasBuddy.

“While some of the nation’s lowest priced gas stations will probably be forced to raise prices slightly, with some declines still happening in the West Coast, there remains a chance, albeit smaller one, that we could still see the national average fall below $3 per gallon.

With the New Year on the doorstep, however, the biggest question motorists have remains what will happen in 2023 — a question GasBuddy’s annual Fuel Outlook will answer later this week.”

GasBuddy data is accessible at http://prices.GasBuddy.com.