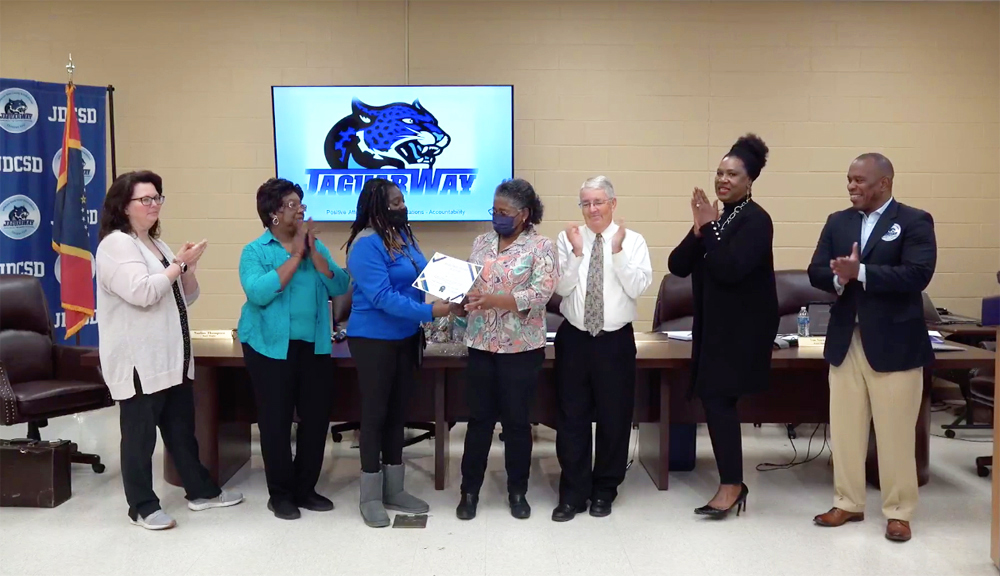 Holley Cochran / The Prentiss Headlight—PHOTO BY HOLLEY COCHRAN Superintendent Ike Haynes and the JDC School Board applaud Veronica Mars as she is presented a certificate and gifts at the school board meeting Monday night.

The first Jefferson Davis County School Board meeting of 2023 was held Jan. 9 at the Academic Success Center in Carson. After the welcome, a moment of silence and Pledge of Allegiance, the board adopted the agenda. Board President offered a welcome new board member Shari Bryant, who serves District 1.

Election of board officers was the first task of the year. Officers serve for one year and are elected each year at the first meeting.

District 2 School Board Member Bobby Wilson made a motion to keep officers the same as they were the previous year. “We have had a great year and I would appreciate leaving it the same,” said Wilson. Nadine Thompson made a second to the motion. There were no questions or concerns raised and the board voted to approve officers as-is. President of the Jefferson Davis County School District is Shonda Ard Burre, vice-president is Bobby Wilson and secretary-treasurer is Nadine Thompson.

“We are probably going to have to hire two people to replace Ms. Mars as she has done a lot for a long time for JDCSD,” said Haynes.

MDE requires that good records are kept for all districts in the state.  “We have never had one citation in any accreditation audit and our records and board minutes have been without flaw,” said Haynes. “She is meticulous and pays attention to detail and everything the board says or does is recorded in the minutes.”

“You have kept me in line so many times and been there for whatever I needed over the past six years, and I can’t thank you enough for what you have done to make me be a better board member,” said Bobby Wilson.

“I have sat through many exit audits after auditors came and the auditors told us that no other district has ever had record keeping like Jefferson Davis County,” said Norwood. “Even when bad decisions were made by the board years ago, the record keeping was always on point.”

Mars was presented a certificate and gifts after over 34 years of exemplary work and dedication to Jefferson Davis County School District.

Carver Elementary was recognized as the school with the highest average daily attendance in the district with 99.20 percent. All campuses exceeded 95 percent for December.

Chief of Police for the JDC School District, Anthony Sims, gave an update on the active shooter training. Sims has been working with principals at each school updating a crisis plan and triage procedure. Sims hopes to recognize students that may have a problem on the front end and try to get them some needed help. Sims and his department continue to provide up-to-date training for staff and students which includes two active student drills per year per MDE.

Shelia Copeland gave financial report with financial statements and her report was approved and accepted.

Superintendent Haynes’ contract was updated and approved. He received a 3.78 out of 4.0 rating from the school board. “I want to commend Mr. Haynes for moving the district forward,” said Norwood. “We wouldn’t even be in a position to consider some of the things we are doing without him.”

• Approved facility use request for the Jaguar Youth League to use the JDC High School gym.