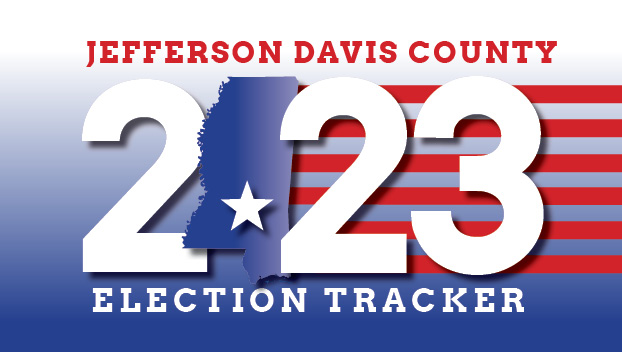 In order to run as an Independent candidate, an individual must also submit a certified petition with signatures for county offices. Party candidates do not require signatures.

Countywide positions that will be open include Sheriff, Chancery Clerk, Circuit Clerk, Tax Assessor/Collector and Coroner. County District positions on the ballot will include Supervisor, Justice Court Judge and Constable. Also on the ballot are Jefferson Davis County Elections Commissioners in Districts 2 and 4. The election commissioners are on a rotating schedule.

Qualifying for Jefferson Davis County Sheriff as of Tuesday is Ron Strickland and Duane Dampier. JDC Circuit Clerk Clint Langley, JDC Coroner Dedra Johnson and Tax Assessor/Collector Kelley Ross-Brown are all qualified, but do not have opponents to date. Bobby Rushing and Cynthia White have qualified for Chancery Clerk. Current Chancery Clerk Charlene Fairley is not seeking re-election.

In the JDC Supervisors’ race, Corky Holliman and Robert Larkin have qualified in District 1. In District 2, Robert Gholar, Derek Hall and Ricky Barrett have qualified.  District 2 Supervisor Charles Reid will retire at the end of the year.

District 3 Demarrio Booth supervisor is running and is unopposed to date. District 4 qualifiers are Terry Mathis and Michael Evans.

Stephen Abram has qualified for District 4 Election Commissioner. There are no qualifiers yet for District 2.

The special election for the 15th Circuit Judge will also be on the ballot. Judge Tony Mozingo announced his retirement Oct. 4 from the 15th Judicial District Court of Mississippi to become the new Executive Director of the Homes of Hope for Children.

Governor Tate Reeves appointed Brad Touchstone to fill the position effective Jan. 1 until the special election can be held in November.

If you are interested in running for any of the above positions, or to inquire about voting information, contact the Jefferson Davis County Circuit Clerk’s office at 601-792-4231.