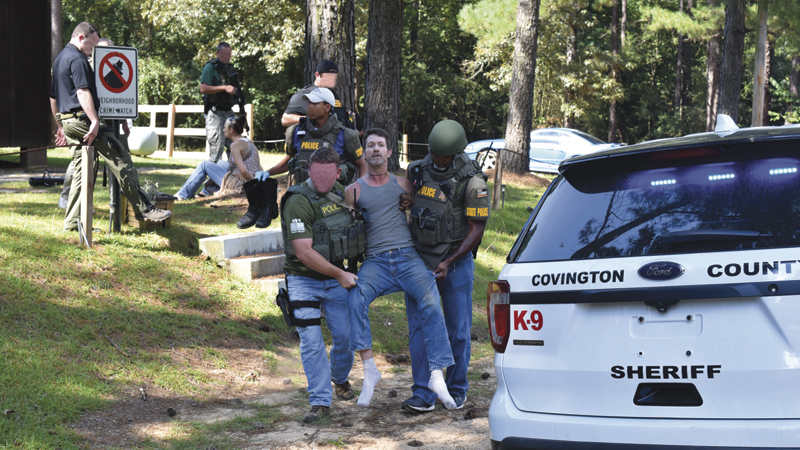 Holley Cochran / The Prentiss Headlight—Scott Hill being removed from his home at 39 Saulters Road on Sept. 15, 2017.

A Prentiss man could face up to 40 years in prison and a $5 million fine for allegedly distributing methamphetamine.

On Sept. 15, 2017, agents with the Mississippi Bureau of Narcotics executed a search warrant on Hill’s home, just one day after Hill had sold methamphetamine to a confidential source.

During the search, agents found $12,380 in a safe in Hill’s bedroom, as well as a plastic bag containing approximately 75 grams of a crystal-like substance in the kitchen cabinet of Hill’s home.

The DEA Crime Lab later determined that this substance was methamphetamine.

Agents also found a digital scale underneath the plastic bag. Hill was arrested and charged with conspiracy and possession with intent to distribute methamphetamine.

Hill will be sentenced on April 17 at 10:00 a.m. by Judge Starrett, and faces a maximum penalty of 40 years in prison and a $5 million fine.

The case was investigated by the Drug Enforcement Administration with assistance from the Mississippi Bureau of Narcotics and the Jefferson Davis Sheriff’s Department.

The case is being prosecuted by Assistant United States Attorney Shundral H. Cole.