TONY WAITS / THE PRENTISS HEADLIGHT – Sophomore Gerald Reese carries the ball for the Jackets as teammates hold off opposition from the East Marion Eagles. The Yellowjackets defeated the Eagles 48-6.

The Bassfield Yellowjackets repeated for the 6th straight year as District Champions. Formally 8-2A, now 7-2A regardless of the number, the Jackets are simply champions, not just on the field, but off the field as well. This is also the 17th District Championship for Bassfield since the district play went into affect.

Over the last few years the community has grown to love the Jackets football team for more than just the play on the field, but for the character displayed by so many of the players off the field. Words you here every day are “disciplined,” “polite,” “gentlemen,” “stars.”

Recognized all over the state by football fans, media and coaches alike one never seems to know who will be the next to step up and be the new D-1 player, the high recruit to major colleges. They have brought pride and unity to a community that needs something to hang there hat on even if just for a short 16 week stint. Everyone affiliated is proud to be a part of the Jacket Nation.

As was anticipated by myself and others, this past weeks biggest rival was no match for the high powered offense and the relentless pounding by the defense.

East Marion came into this game having spent hours upon hours communicating to anyone who would listen how good they were and how bad they were going to beat down on the Jackets. But as has been for years in the regular season East Marion falls like all the others in the district, whatever district that may be.

The first half of this game was as expected tough, hard hitting, and each trying to get the slight edge over the other. With the Jackets it was about wearing down its opponent early for gains later, for East Marion it was let’s score and score quickly and often. The Jackets won that battle. East Marion wore down and at the same time could not score. End result was just what was expected – a blow out.

As has been in almost every game, the Jackets won the toss and deferred to the second half giving East Marion its first chance to try and score against the Stone Hinge defense of the Jackets. A penalty started the game for the Eagles after a 27-yard kickoff return, then four yards offense and the punt fest began, a 39 yard punt to start the night, pinning the Jackets back to their own 17 yard line.

It would have been a rare three and out for the Jackets, but a roughing the kicker penalty on Brandon gave the ball right back to the offense. The Jackets got into the penalty phase also and gained only two yards on the drive after the Eagles penalty. A 27-yard punt gave the Eagles descent field position at the 35.

East Marion had to take a timeout before the start of the series, too much confusion in the backfield. A good sack on the next play was nullified by a holding penalty 40 yards away from the play. To say that the coaching staff was upset was an understatement. East Marion’s quarterback then threw the ball into the ground to avoid a sack again, but was flagged for intentional grounding. A huge penalty. This penalty carries a loss of down plus 15 yards from the spot the quarterback threw the ball. A total set back of 21 yards.

Facing a third and 25, East Marion went back to the air and the Jackets were flagged again, this time for pass interference on a ball that was thrown into the bleachers. There is no overthrow rule to prevent such a penalty, but common sense also comes into play. Nevertheless, East Marion now faced 3rd and 10. Another East Marion penalty made it 4th and 10 after the Jackets refused the call. An incomplete pass brought on the punting unit this time only 32 yards to the 29.

A quick three and out by the Jackets, a phrase that you have not seen me use all year, and Mancuso was back to punt for the second time in the quarter. Netting only 30 yards on this punt put East Marion in good field position at the 34.

Three and out by East Marion on a -4 yard drive and another punt of 35 yards. More penalties forced the Jackets into punt formation as well after a good start of a run by Greg Green of 19 yards up the gut. Mancuso shanked his punt netting 18 yards and so far the victor was East Marion in the punting war.

Starting at the 22, East Marion was shut down until another pass interference call by the same side judge on the same defender gave new life to the Eagles. A sack made by Jimmie Funches an incomplete pass and East Marion was back to punt. Coach Mancuso had warned the team on every punt to be ready for a pass, and this time the Eagles did so completing a 27-yard pass to the Jackets 37.

The wheels fell off this drive quickly – sideline penalty (-5 yards), holding (16 yards) and suddenly it was 4 and 31 from the Jackets 42. This time they punted.

Jackets took over with only 5:13 in the half, and neither offense had come close to scoring. Seven straight runs and the zero was off the board for the Jackets as T-Rod finished the drive from one yard out. Mancuso kick was good, 7- 0 Jackets.

A quick three and out by the Eagles but a good 40 yard punt sent the Jackets back to its own 40.

With the clock down to just 64 seconds in the half, the Jackets needed another score before half, but with only two time outs left and 60 yards of real estate in front of them and a tough Eagles defense… well!

Well, the Jackets showed what Championship teams are made of, but before the drive could get started, the second time out had to be used. A good pass, catch and run by speedster Curtis Mikell for 35 yards and suddenly the Jackets were at the Eagles 25 yard line.

CJ over threw his receiver down the right side into the end zone. All was needed was a 6’3” high jumping receiver to go up and take the pass. In steps sure handed Jamal Peters in the far right corner of the end zone-double coverage and all-the pass was high enough that there was no way for the defense to get a hand on it, but not out of reach of Jamal who politely reached up and hauled in the second crucial touchdown of the evening. Mancuso kick was good with 29 seconds in the half. Jackets up 14-0.

East Marion was not finished though. A 15 yard run, a 26 yard pass, and finally a 29 yard run all the way to the 8 yard line as the half time horn sounded. Half time and East Marion was exhausted.

Every game but one, the Jackets have taken the opening kickoff of the second half and straight down the field and score. Tonight was crucial, with only a 14-point lead, anything could happen.

The Jackets played Jacket football-12 plays-7:25 seconds of the second quarter gone and CJ Moore finished a 58 yard tough drive to pay dirt. Mancuso PAT was good and Jackets were up 21-0.

East Marion got their collective breath and had to fight back. Five plays and a final 40 yard pass by East Marion as Johnathan Abram hit Kristopher Newson for the touchdown-the PAT hit the upright and the ball seemed to still be bouncing the Jackets way-Jackets up 21-6.

The Jackets went on another crucial drive-on the 4th play of the drive Gerald Reese went 51 yards – a holding call on Rachaud Green nullified the touchdown and put the Jackets in a hole back to the Eagles 39.  Three more plays and the 3rd quarter came to an end. The 4th quarter started with a Mancuso punt down to the Eagles 18 yard line.

A -4 yard drive and the Eagles were punting again-this one for 42 yards.

The Jackets had set up a trick play twice in the first half, according to Coach Mancuso, but the defense was not right, so it was called off. This drive began and the same play was called. The defense was perfect, CJ threw to Jamal, Jamal threw back to CJ, then CJ threw down field to a wide open Curtis Mikell-56 yards and BAM-Jackets led 28-6.

In on defense, CJ was in the right place on the right play as the center sailed the ball over the QB’s head and CJ took the gift at the 15 yard line-turned around from defense to offensive Quarterback. A handoff to Rachaud Green who was headed to the end zone-but came up short at the two as the ball was stripped from his hands and bounced right into the hands of Jimmie Funches in the end zone, giving him his first touchdown of the year-about 2 minutes passed and the Jackets scored their 3rd touchdown of the second half-Mancuso PAT good 35-6.

East Marion, visibly exhausted, set up for the kick off. A squib kick down to the 18, but something strange happened on the way to the ball. The Eagles receiver didn’t pick up the ball so Cornell Armstrong showed them what to do as he fell on the ball for the Jackets.

T-Rod scampered 18 yards for the 3rd touchdown of the 4th quarter. Mancuso PAT was wide but Jackets were rolling 41-0.

Again East Marion fumbled the kickoff but recovered-obviously a very tired and out of shape team for this late in the season. This time after an 18-yard run and the second cheap shot on Jamal of the night, East Marion fumbled on the next play and the new #57 Racheem Booth recovered at the 49-yard line. Kind of an omen that it was at the 49.

On the second offensive play Gerald Reese got his touchdown back with a 47 yard run this time to pay dirt and the 4th touchdown of the 4th quarter. Mancuso PAT was good and the Jackets ended with a cakewalk 48-6.

This was the first game this season that the Jackets had scored four touchdowns in a single quarter and it could not have come at a better time or against a more formable foe.

Both teams ended the game with the JV playing as the clock ran out on East Marion’s attempt to steal away the banner from the Jackets.

“A lot of people question you coming into this game. We know who we are, but this is just one step. Enjoy the weekend and be ready. It’s one game that matters now. There is no tomorrow if you lose,” Mancuso told his team after the game.

The Jackets will face an old district foe in Richton (12th-in state 2A) next week at Willoughby Field. Richton has won eight games this year, and coached by the son of 1974 BHS graduate Linda Smith.

Richton made it to the 4th seed of the new district 8-2A by winning its last two district games, and coming from a 28 point deficit and scoring 34 unanswered points to defeat Heidelberg.

Richton will be playing with everything in them to win their first playoff game in years. The Jackets have to bring their “A” game each and every week or all the hard work will fall short. There is only one final to this season and that is a win in Jackson, on Saturday December 7 at 3:00 p.m.

Looking at the brackets, it is probable that Bassfield will play the first three games at home barring an upset and travel for South State. One possibility of playing at home for South State is if in Round 2, Madison St. Joe defeats Taylorsville. We would have to travel to Madison and then play home for South State because of tiebreakers.

Pack the house as the march to Jackson continues! 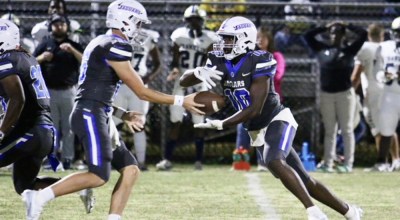