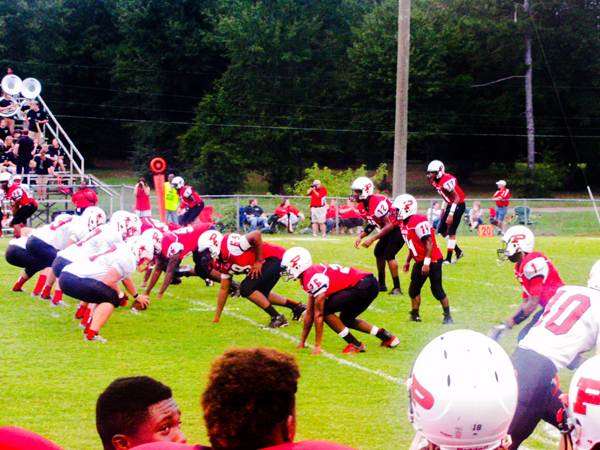 Friday night the lights were back on at A.E. Gray Field. Prentiss played Loyd Star. This game was very personal to the Bulldogs after the tough loss last year to the Hornets.

Prentiss won the toss and received the ball first. Prentiss came out slowly. The Bulldog defense picked up where they left off last week and totally dominated. After two drives with no points, the Bulldogs decided to spread the field. A couple plays into the drive, Donte Ford threw a 31-yard touchdown to Tim McNair, Jr, giving Prentiss a 6-0 lead at the end of the first.

At the beginning of the second quarter, Prentiss took off. Donte Ford threw a 25-yard touchdown to Anthony Walker. After the two-point conversion, PHS went up 14-0. Loyd Star would score on a blown assignment by the Bulldogs defense. Prentiss retaliated with another touchdown from Donte Ford to Daronte’ Hartzog. Prentiss wrapped up the half on a high note, leading 28-7.

The second half started with Loyd Star scoring on a kickoff return. The Bulldogs pounded the ball after that. PHS put more points on the board, with Deantye Crockett touchdown run. Prentiss defense give nothing else to the Hornets. The Bulldogs scored again off Donte Ford’s, QB sneak, giving him four touchdowns for the game. Prentiss kept their foot on the gas pedal and one more time before the game ended. The final score was 42-14.

Coach Tim McNair said after win, “We had a good week of practice. I was pleased with the offensive line, quarterback, and wide receivers play. Defense continued to look good, led by the leadership of Kevin Hall. Overall the team improved tremendously from last week. As we prepare for Bassfield, the kids are motivated to step to the challenge and hope we have great fan support behind us.”

The lights will be shining bright Friday when the Bulldogs meet up with their cross-county rival, the Bassfield Yellowjackets. Prentiss is hoping that their momentum will propel them to beat Bassfield. The Jefferson Davis County Championship will be played on A.E. Gray Field at 7 p.m.