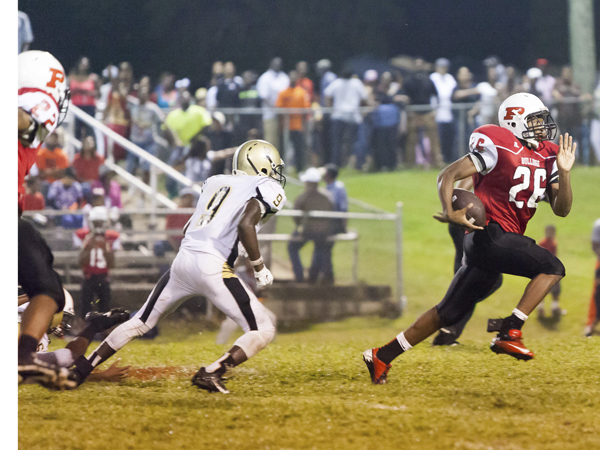 THE PRENTISS HEADLIGHT / Bulldog #11 Donta Ford makes a move around a Jacket hoping to gain yardage for a score.
(Photo by Tony Waits, www.tonywaits.com) 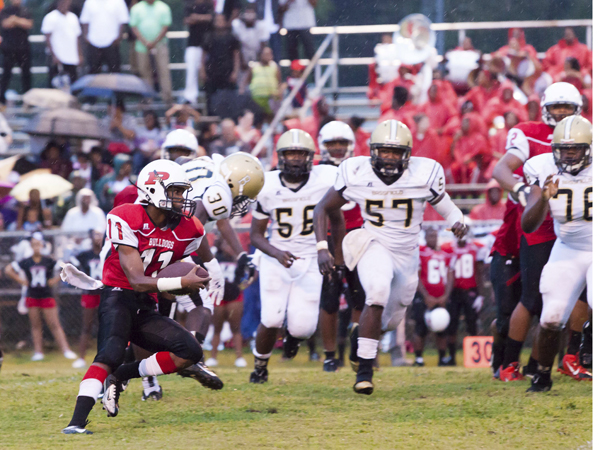 THE PRENTISS HEADLIGHT / Prentiss Bulldog #26 charges past a Yellowjacket with his sights in the end zone.
(Photo by Tony Waits, www.tonywaits.com)

The Jefferson Davis County Championship game was played on Friday night at A.E. Gray Field. Prentiss and Bassfield both came in with 2-0 records. Prentiss was looking to beat Bassfield for the first time in nine years.

The game started off very competitively and the first moments were intense. The anticipation on the field and in the stands was high. The rain did not dampen spirits. Prentiss had the first drive but didn’t move the ball. After the punt, the Bulldog defense would dominate Bassfield offense. After another failed Bulldog drive, Prentiss would stop Bassfield on three-straight downs. Bassfield would convert the 4th down and score a touchdown. At the end of the first, the Yellowjackets were up 8-0.

In the second quarter, turnovers plagued the Bulldog offense. The Yellowjackets would capitalize on all of the turnovers, scoring 3 unanswered touchdowns. The score was 30-0. Bassfield would try to score again before the half. Anthony Walker caught an interception, and would score a pick-6 as the time expired. The Yellowjackets would be up 30-8 going into the half. In the third quarter, PHS came out fiery on defense. They wouldn’t surrender a single point in the quarter. But although the defense dominated causing 3 straight fumbles, the offense still continue to struggle, only mustering a couple yards of total offense. The third quarter would be scoreless.

Going into the fourth, Prentiss had hope of a comeback. After a failed PHS drive resulting in a punt, Bassfield got the ball back looking to put Prentiss away. The Bulldogs would continue to fight and the defense came through once again. Demazie Mikell would return a fumble for a touchdown. The comeback hopes were looking great. The crowd was back into the game. But the hopes quickly faded after Bassfield kick return would put them on their own 2two-yard line. Bassfield punched the ball in for a score. Then the Yellowjackets scored one more time to close out the game. The final score was 44-16.

Coach Tim McNair had these things to say about the tough loss, “I was very displeased with the first half performance, but I was content with the effort in the second half and the fact that we didn’t give up. We must continue to work hard and improve day in and day out. Finally, we appreciate all the fan support and hope it continues the rest of the year.”

The Prentiss Bulldogs are now 2-1. They will travel to Monticello to take on the Lawrence County Cougars on Friday at 7:00 p.m.