Saints shut out Bulldogs in first home game of the season 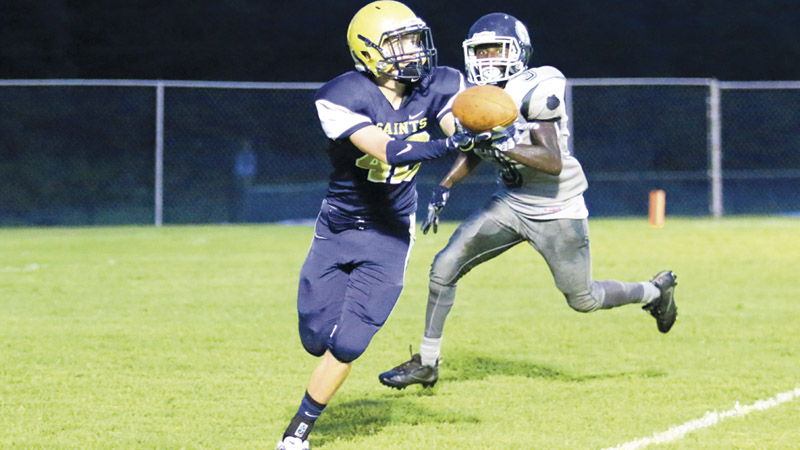 The Prentiss Headlight—Chandler Holloway #42 makes a touchdown catch from quarterback Steven Colson in the Saints' 36-0 win over the CCA Bulldogs.

The Prentiss Christian Saints dominated the Christian Collegiate Academy (CCA) Cougars in all phases of the game with a 36-0 victory in the first home game of the season Friday night.

Wade Watkins got the Saints off to a hot start with a 43-yard run for a touchdown. Then, Chandler Holloway caught a 13-yard touchdown pass from Steven Colson for a quick 14-0 lead early in the second quarter.

Jacob Anderson scored on a 24-yard run before halftime to give the Saints a 20-0 lead.

The Saints’ defense opened up scoring in the second half with a tackle by Triston Bridges, resulting in a safety, adding two points to their lead.

Hunter Bolin and Micah Bullock led the defense with six tackles each and Layton Hudson had a crucial sack of the quarterback, stopping a Bulldog drive. Colson continued the scoring attack with a 27-yard run.

Finally, the Saints defense finished up the scoring on an electric 67-yard interception return by Jacob Anderson, culminating in a 36-0 win.

Colson contributed 119 yards of total offense with a rushing touchdown.

The Saints’ defense was dominant, holding the CCA Bulldogs to only two first downs and the first shutout of the season.

Prentiss Christian moves to 2-0 on the season with an open date next Friday.

The Saints return to action on Friday, Sept. 8, traveling to DeKalb to take on the Kemper Academy Rams.