The 2017 high school football season has come to a close, and the Jefferson Davis County Jaguars, the newest team in the state, are the 3A 2017 state champions.

Mr. Football, quarterback, Kenny Gainwell all week had been touted as the sole reason why the Jaguars would not score, much less win this championship game.

A scramble off a pass, Gainwell was met by several Jaguars, but an attempt to break free was met with a concussion stopping hit from LaDarren Ball and Malik Shorts. Hits like that one, was the defensive story of the game for the Jaguars.

It has always been said that offense sells tickets, but defense wins championships.

The Jaguars all season had just enough of both, but the defense simply controlled this championship game from the first series to the last.

The Jaguars’ offense played a championship game.  Controlling the clock and scoring with relentless pounding of the ball, then hitting two passes for touchdowns that caught Yazoo County standing and looking.

The Jaguars controlled the game offensively with sustained drives having the ball for just over 30 minutes compared to 17 minutes and 57 seconds by Yazoo County.

The Jaguars’ defense controlled the game by stopping the Yazoo County running game cold, holding the team to 45 net yards for the game rushing and 17 yards net passing.

The Panthers averaged 377 yards per game for the year, for this game 62 yards total.

The game started off with the kickoff going out of bounds on three straight tries, pushing the kickoff all the way back to the 20-yard line.

The offense exited the field as fast as they had taken it, giving the Panthers the feeling that this game would be just like all of their others. However, their offense had not yet been introduced to the Jags’ defense.

The Panthers had the ball for barely two minutes, gained eight yards, five of which came from a Jags’ penalty.

The Jags could only gain eight yards themselves on their next series before having to punt.

A 47-yard punt pinned Yazoo back to the 14-yard line. A huge sack by Kenterio Smith, a holding penalty on Yazoo, and a delay of game forced a punt from the 17-yard line.

Jafharis McKines returned the 34-yard punt to the 31-yard line of the Panthers.

It took only two plays as the Panthers were focused on the run game of the Jags allowing Kyser Booth to slip through the line, all alone in the end zone as Lyric Hall threw the ball to the back of the end zone for a touchdown. The Jags tying the game 7 – 7 as Caspian Daley finished his final game hitting all four of his extra point tries.

Another three and out, another sack, and only three yards net on offense and the Panthers of Yazoo were punting again.

The Jags went on a time consuming 12 play drive using the run to wear down the huge defensive line of Yazoo and the single pass to catch the Panthers at the line as Jafharis McKines took in the swing pass and went in from 15 yards out. The Jaguars were up 14 – 7 almost midway into the second quarter.

The Yazoo County offense put together a six play drive before having to punt, but Malik Shorts didn’t secure the punt giving the Panthers the first break of the game and the ball at the Jags 25-yard line.

Trying to run was not happening for Yazoo, but a facemask penalty by the Jags gave the Panthers first and goal at the 10-yard line.

A much wanted chop block penalty that had been pointed out over and over by the Jags coaching staff finally was flagged.

The Jags’ defense once again stuffed the run forcing the Panther coaching staff to try the pass, but Ronald Baker intercepted and the Jaguars took over at the 20-yard line after the interception in the end zone and touch back.

It took only four plays to go the 80 yards, as a busted play became a 45-yard run for Lyric Hall down to the Panther three-yard line.  On this play, the Yazoo defense showed signs of quitting as the corner just sat at the 10-yard line awaiting Lyric Hall to get to him.

Jafharis McKines finished the drive for his second touchdown of the evening from three yards out. The Jaguars were in control 21 – 7.

A sack, a near interception, and a six yard pass and the Panthers had no answers on offense, punting leaving 31 seconds for a kneel down by Lyric Hall to end the half.

The Jags’ offense had moments of self-destruction on the opening drive of the second half.

A block in the back penalty on the kick-off had the Jags pinned at the 11 to start the drive, then a false start twice in the drive, and though they held the ball for over six minutes of the quarter they had to punt the ball to the Panthers.

A first down by the Panthers who got only three on the night, suddenly meant nothing as the punting team was back on the field again after being on the field for less than 90 seconds.

The Jags ate up the rest of the third quarter on the ground with an 11 play drive finished by a delayed counter draw that sent Kyser Booth to the left as the defense went to the right. Nineteen untouched yards, and the Jags were slowly putting this championship in the bag leading 29 – 7.

Kyser Booth sealed the deal with a 17-yard run, scoring his third touchdown of the day and going over 100 yards making him the MVP of the game. The Jags lead was now 36 – 7.

The Jaguars finished the night with 328 yards rushing on 54 carries three touchdowns, passing for 43 yards on two of four and two touchdowns.

To the 27 seniors, congratulations on finishing your high school career on top as state champions. 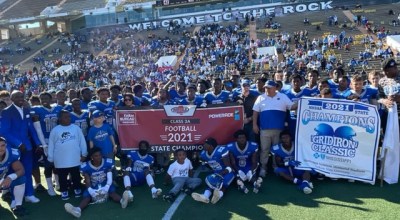 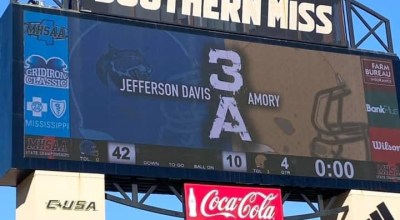